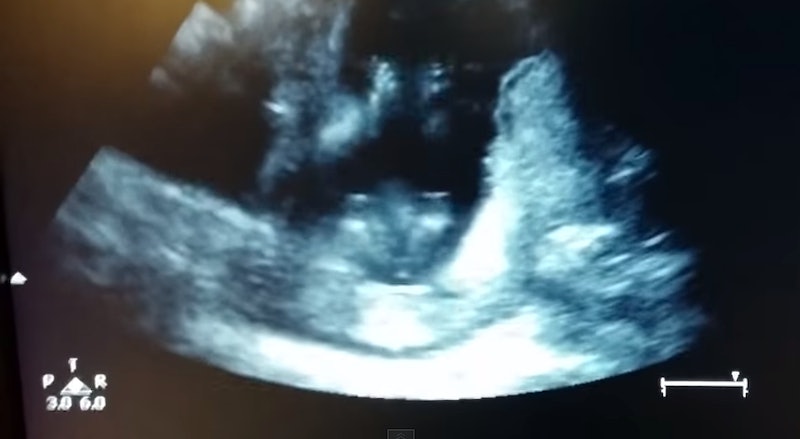 If you're a fetus and you know it, clap your hands! Incidentally, it turns out you can teach your baby cool party tricks to impress the other soccer parents before it even comes out of your body. That's exactly what happened to Jen Cardinal, who now has an ultrasound of her baby clapping in the womb. Aside from the fact that I am ridiculously jealous of people who manage to go viral before they're even born (saving some side-eye for you, surprise quadruplets of 2014), this is pretty much the most badass baby I've ever seen, in or outside of someone's uterus.

But this kind of cool sauce appears to be genetic, because the first reaction of this baby's parents was to back up the ultrasound video, whip out a camera, and narrate it to "If You're Happy And You Know It". Amazingly enough, this kid's only been cooking for 14 weeks, which means by the end of this, it's probably going to be doing full on in-womb pirouettes and then tap dancing straight out of the delivery room. It's obvious to anyone who watches that this baby can keep a beat.

Seriously, were any of us this talented at 14 gestational weeks? Behold the youngest creature you'll ever envy:

That's barely even the tip of the iceberg. This kid has a whole lot more clapping where that came from, and several band members already in place for back up. Here's the original video:

While you're (justifiably) freaking out about what aliens, I mean babies, can do from the womb, you should know that clapping is far from the extent of it. Babies are actually like the best/worst uterus roommates ever. Aside from clapping, they can:

Kick the crap out of you

Get ready to have your heart snap in half. Although they aren't producing the sounds yet, babies in the womb can display telltale signs of crying behavior like irregular breathing, open mouths, and even lip quivering.

I imagine this is super cute for like...the first ten seconds of your in-utero earthquakes.

So there you have it, folks! There are all sorts of weird things these little body invaders will do, aside from sit on your bladder and make you upchuck your lunch. Fingers crossed that one day I get one of the impressive ones whose ultrasound goes viral, too (NO PRESSURE, EGGS).