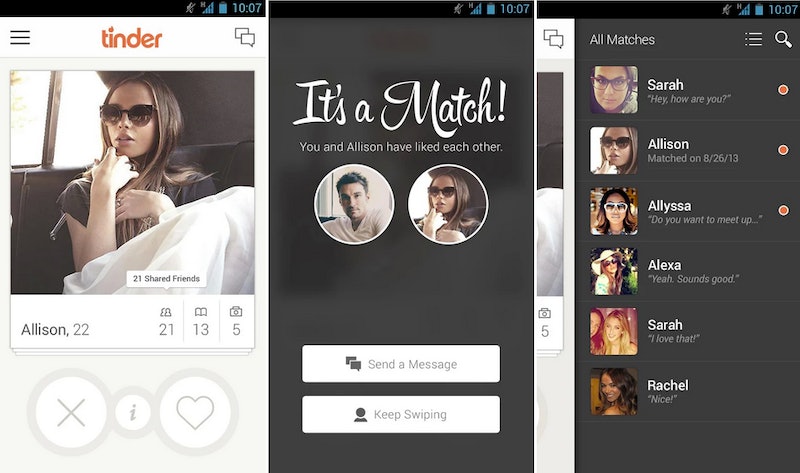 Tinder's propensity to bring out the worst in some of its users isn't exactly a secret: the web abounds with Tinder horror stories about right-swipers (usually men) unleashing their inner sexist on women. But one vigilante developer decided to use his hacking skills for good — at least, so he thought — this week: he developed a Tinder hack that matched flirtatious men with other flirtatious dudes, both of whom thought they were talking to a hot lady they'd selected. His aim? To address the sexist behavior of men on Tinder by exposing them to the same treatment themselves.

After he revealed all to The Verge this week, commentary flowed, either celebrating the unnamed hacker's "taste of your own medicine"-style prank (Buzzfeed called it "genius") or condemning him for invading privacy and confusing unknowing users of the app. Tinder itself has not released any comment, but the hack probably hasn't made them all that pleased.

One voice that's been mostly missing from the crowd, however, has been a feminist perspective. Nobody likes a party-pooper, but let's face facts: the hack's hilarious if you like comedies of misunderstanding, but as far as anti-sexism credentials, it's got a lot to be desired — because, I'd argue, it doesn't actually discourage dudes from being sexist at all.

This hack implies that sexist dudes were never going to be convinced by women asking them to stop or explaining why they were being offensive: the only true medicine could be administered by other men.

Here's how the prank worked: The hacker used Tinder's set-up — linking Facebook profiles and photos with the app's match systems — to exploit it. He created two fake profiles with their own Facebook authentications, matched every pair of men who liked them with each other, and was then able to monitor their conversations. (The hacker says he stepped in before anybody met in real life.)

I'm not denying that there are definitely shockingly sexist men on Tinder chat, or that their behavior needs to change. But was "giving them a dose of their own medicine" ever going to be a powerful way to change their behavior? In the hacker's own words, "The original idea was to throw that back into the face of the people doing it to see how they would react."

But throwing it back in their faces wasn't successfully anti-sexist in this circumstance, for three reasons.

The "gotcha" moment the hack wants to use to teach users a lesson — that they're making sexual overtures to to another dude — is all about the shock of that discovery, and its results. "OMG having sex with a dude so gross!!" Instead of solving sexism, we're just adding homophobia to the cocktail.

First, surely seeing another person talk in the same way that you do is only going to reiterate that it's acceptable. Once it was clear that the other person texting "SHOW ME UR TITS" was a dude (and generally it seems they figured it out reasonably quickly), what would stop the two from bonding, sympathizing about their victimhood, and laughing about talking that way to a man? Being matched with people who talk the same way you do just makes it seem like normal discourse. If anything, the hack just helped douches find each other.

Secondly, there's a problematic homophobic undertone in the hack's set-up that makes it frankly rather icky. The "gotcha" moment the hack wants to use to teach users a lesson — that they're making sexual overtures to to another dude — is all about the shock of that discovery, and its results. "OMG having sex with a dude so gross!!" Instead of solving sexism, we're just adding homophobia to the cocktail.

Thirdly, while it's crucial for dudes to take responsibility for their sexist rubbish on these platforms, leaving women out this entirely — letting men have their epiphanies by themselves — feels kind of disempowering. This hack implies that sexist dudes were never going to be convinced by women asking them to stop or explaining why they were being offensive: the only true medicine could be administered by other men. I get the logic behind it all, but there's a nasty taste of "girls can't possibly do this on their own" that makes this hack a bit sour.

A far better anti-sexist prank? Watching dudes unwittingly catcall their own mothers. Now that's being smacked upside the head with a sexist double standard — by the women affected themselves.

More like this
Women Around The World Are Cutting Their Hair In Solidarity With Mahsa Amini
By Darshita Goyal
10 Ways To Be More Empathetic To Your Partner
By Raven Ishak and Lexi Inks
Think Your Partner Is Cheating? These Tarot Cards May Confirm Your Suspicions
By Kristine Fellizar
Why A Libra & Libra Couple Might Become Codependent
By Kristine Fellizar
Get Even More From Bustle — Sign Up For The Newsletter