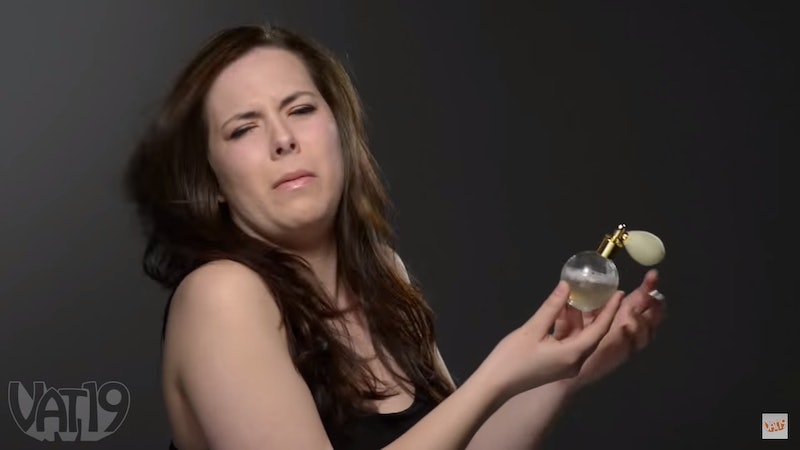 Aw, man, guys. Can we just call a truce on April Fool's Day this year? Because if I have to deal with anything as utterly disgusting as this prank where models were tricked into spray poop-scented perfume on themselves, I'll probably just quit the human race. Dolphins don't prank each other, right? I'll just join them and avoid people like the guys from Vat19, who invited these poor, unsuspecting women to model for a perfume ad and then replaced all the perfume with a smell called—brace yourself—"Liquid Ass".

You know what? I have to say that I admire these women. The dude-bro responsible for their torment may have called them "aspiring" models, but after enduring that literal crap, they are one hundred percent professionals in my book. Both of them just kept plowing through the shit storm until they legitimately couldn't take it anymore, and the pranksters can have a good laugh at their expense if they want, but these women are total champions in my book. I would not have lasted that long spraying poop smell into my face.

That's what I want us to all bear in mind as we endure the montage of admittedly hilarious poop reaction gifs. You think you had a rough week? Don't even with these ladies. DON'T EVEN.

Here's the unfortunate switcheroo that happened before the shoot:

First they made them spray it on themselves:

And then the guy put it through a fan, to "coat them with its essence":

I feel like this video is decidedly less about the shenanigans of this dude-bro and more about the triumph of these two fearless poop-smelling ladies. You can see the resulting "commercial spot" that they made out of all the takes by watching the full video here:

This isn't even the worst of it, though. WAY too many other people have been "inspired" by liquid ass to torture other human beings with. HERE ARE ALL THE PEOPLE WHO MUST BE STOPPED:

1. These guys who let it loose in an elevator

Like, is that even a prank at this point? Or is this just being an asshole?

2. This woman who put it in her husband's MOUTHWASH

3. This guy who sprayed liquid ass on chocolate and tried to make his wife eat "poop"

This was upsetting to watch on like six hundred levels.

4. This woman who filled a water balloon with it and dumped it on someone

Who hurt you, water balloon lady?

So yeah, this is pretty much the whole sum of why I'm not making eye contact or socially engaging with anybody come April 1st. Keep your liquid ass TO YOURSELF.