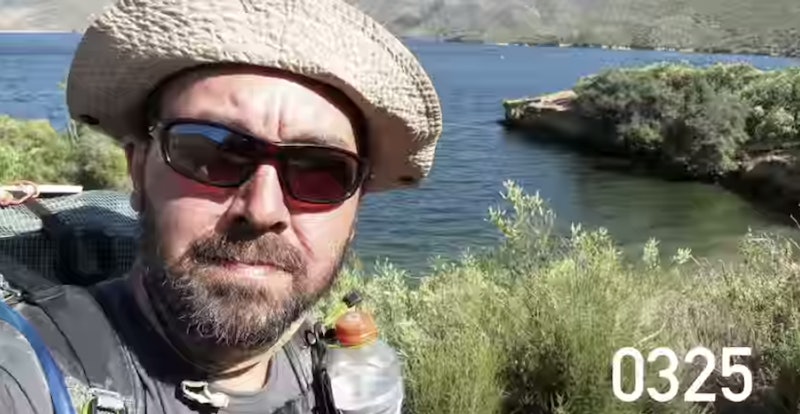 You gotta respect a person who chooses to peel away from society to tackle a huge physical feat solo. Especially because when said feat involves hiking the distance between Mexico and Canada, because at that point, it transcends physicality and starts to involve emotional, spiritual, and mental strength. Traveling alone can be wearing. But Andy Davidhazy took on that challenge with a smirk and took a selfie every mile of a 2,660-mile hike.

The Austin man took about five months in 2013 navigating the Pacific Crest Trail—yep, the same one Cheryl Strayed conquered in Wild. Davidhazy reckons the entire trip involved close to 4.5 million individual footsteps, which unsurprisingly lent to his burning through four pairs of shoes throughout the course. Dude, I get blisters around mile five almost always so I find that kind of coverage alone jaw-droppingly impressive. He had to dodge the blistering heat of Southwestern deserts, poisonous snakes, illegal drug running activity, and countless scorpions. He braved unseasonal snowstorms, wild bears, a freaking wolverine, and I'd bet countless urges to just charter in a chopper so he could call it quits. Here's the face of a wholly determined man:

"I never imagined that doing something so seemingly pointless could have such a profound impact on my life," he said.

I am in love with that sly little grin he bares at the end of the trail. But...how did he manage to survive all this? I'm still left a little boggled until I peep his vlog reviewing the three key points of his journey:

OK, cool—he proves he is human and admits the trail is pretty tough. No kidding! Also, I realize how into his hat I am. I never realized floppy canvas hats could be so...tough? And kinda sexy?? It's also nice to know he did take the occasional break.

Here he accidentally stumbles upon the trail's midpoint. This understandably lifts his mood significantly. "That's pretty neat," he cheerfully says.

Unfortunately, snow and other dangers proved such a threat, Davidhazy wrapped the last 200 miles to Canada trudging up paved roads. Who cares, though, right? He finished and that must feel pretty dang good. (Even though he sadly appears to have ditched The Hat.)

Scope the rest of his vlog below:

Kinda makes you wanna cancel weekend brunch plans and move your lower limbs, huh? If nothing else, surely mimosas would go over well in a CamelBak, right? I'll test and let y'all know.

More like this
Twitter Is Saying The Same Thing About Roger Federer’s Retirement From Tennis
By El Hunt
This Psychological Effect Might Be Keeping You From Hitting Your Goals
By Lexi Inks
You Can Stay At The 'Hocus Pocus' House On Airbnb
By Alexis Morillo
Craving The Beach? Here's Your Guide To A Solo Vacation In Turks & Caicos
By Alexis Morillo
Get Even More From Bustle — Sign Up For The Newsletter