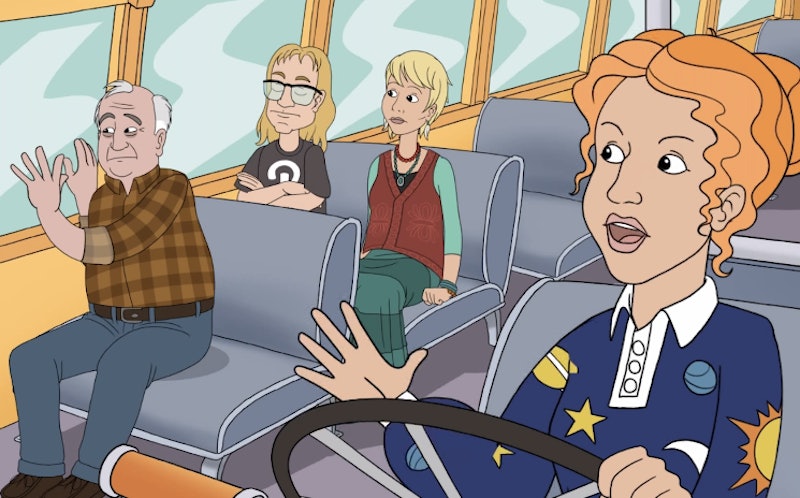 The measles outbreak that originated at Disneyland in late-December continues to spread; the CDC estimates that between January 1 and March 20 of this year, 178 people in 17 states and the District of Columbia have been infected with the disease. Most of those affected were unvaccinated. In an effort to encourage people to vaccinate their kids and point out the shear ridiculousness of anti-vaccination parents, College Humor has released a parody video combining anti-vaxxers with The Magic School Bus. For those of you who need a reminder, The Magic School Bus was an animated series that aired on PBS between 1994 and 1997, based on a beloved set of educational children’s books by Joanna Cole and Bruce Degen. The series followed the adventures of Miss Frizzle and her elementary school class as they went of field trips to fantastic locations, like the solar system, the ocean floor, and the inside of the human body. Pretty much, it was the best show ever.

In this parody, Miss Frizzle hosts a field trip into the human body. Her students can’t go because they are unvaccinated and therefore a danger to the general public. Instead she takes their parents along for a lesson in basic biology. These parents embody stereotypes of different types of anti-vaxxers, with the “I just believe that vaccines are the parent’s choice” guy, the “I believe they’re unnatural” hippy mom, and the paranoid “they’re a conspiracy!” dude.

As Miss Frizzle says, “Let the learning begin!” Here’s how she explains it:

As the measles vaccine enters the bloodstream, the immune system is activated. You see? Those white blood cells are learning how to protect the body from the disease.

The vaccine contains a weakened form of the disease, which passes through the body harmlessly.

Also, there is absolutely no mercury in modern vaccines.

And they don’t cause autism. Shut up, Jenny McCarthy.

This video hilariously skewers the arguments of parents who refuse to immunize their children, but it’s not clear to me how effective videos like this (or this) are in actually changing the minds of those who are against vaccinations. For those of us who already support immunization, the logic of vaccines seems inescapable. But anti-vaxxers don’t seem particularly concerned about logic, do they? It’s distressingly unclear how to convince these parents to do the right thing. A 2014 study in Pediatrics found that pro-vaccination PSAs actually make parents less likely to immunize their kids, and another recent study found that parents are more likely to listen to random internet comments about vaccines than to facts from reputable sources. It’s easy to make fun of paranoid, rumor-believing, logic-denying parents, but these people and their refusal to listen to reason become considerably more menacing when their decisions affect public health. Is public shaming—through videos like this one—the way to finally convince them? At this point—and with people’s health at stake—it seems like it’s worth a try.