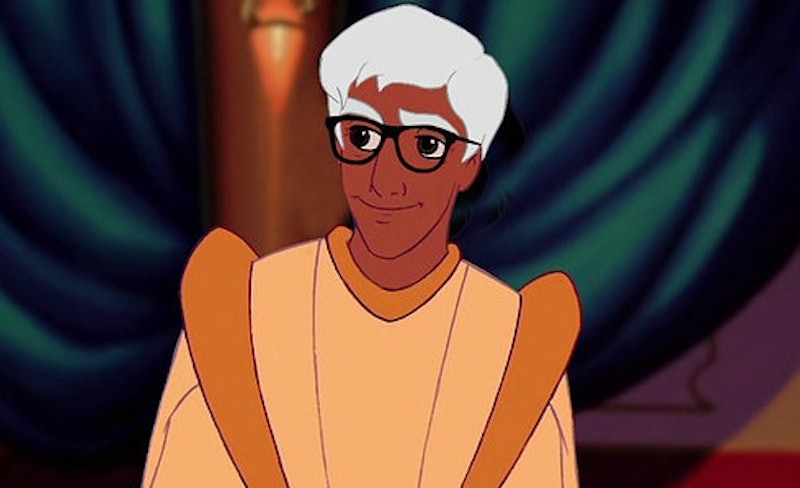 Sure, the many Princes depicted in Disney movies are spectacularly handsome as young men — but how well would they age? Pretty well, it turns out. In her “7 Disney Princes Who Aged Into Silver Foxes” series, BuzzFeed's Loryn Brantz imagines what a few of Disney's leading men might look like in their twilight years. And you know what? They're not half bad. I mean, I realize they're animated characters, but that doesn't mean we can't still appreciate the kinds of people they might have grown into if they were real.

The stories of these Disney silver foxes are a little different than those dreamed up by the Huffington Post in their similar series, which depicted Disney Princesses as older women — but either way, it gives them all the sort of “happily ever after” we can feel good about. In both cases, you see, these characters didn't just age gracefully in the physical sense; they've also done it in the “hey, let's use our limited time on Earth to make the world a better place” kind of way. Take Aladdin, for example. Back in his “street rat” days, he looked like this:

Although he presented something of a “bad boy” persona, he stole from necessity and shared his somewhat ill-gotten gains with those who were even less fortunate than he was. These days, however, his rough edges have been softened:

During his reign as Sultan, he has worked hard to narrow the income gap by focusing on charitable efforts and implementing public programs. He and Jasmine apparently enjoy long walks outside the palace walls; they celebrate their anniversary every year by taking Carpet on a ride around the world.

Or consider Eric, the classic handsome and dashing prince:

Eric was somewhat wishy-washy as a young man, but he seems to have grown up nicely:

He still resides in the family home with Ariel; they have three children, two of whom took to the water like… well, you know. Like Aladdin, he's done his best to better his kingdom: In order to protect the aquatic environment that surrounds his kingdom, he's put a variety of regulations on fishing in the area, as well as moving forward with a major clean water initiative.

All of this is a welcome change from some of the previous imaginings of what the future might have held for these characters once the final page was turned and the credits started to roll. "Unhappily Ever After," for example, shows Ariel suffering the aftereffects of an oil spill, Tarzan's discontent in the modern world, and the puppies from 101 Dalmatians all cooped up in a shelter. But while I think these images are important — they remind us of the stark reality faced by most of the world, and in doing so, urge us to act for change — there's also something to be said for giving us a positive example, as well. That's what these Disney Silver Foxes and Disney Princesses as Older Women series do: They show us that, if we act the right ways, we can not only make a happy ending for ourselves, but also help others achieve their happy endings, as well.

Head on over to BuzzFeed to see the full series — and pay especially careful attention to the last two. They're hilarious. Trust me.