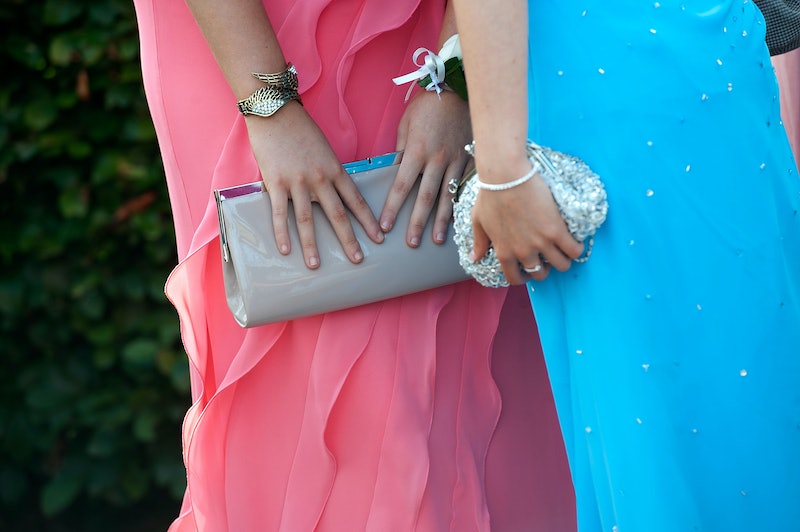 Lots of students like to ask people to prom with a grand gesture — or an over-the-top gesture, depending on your point of view — but why would some students be allowed to stage such "promposals," while others might not be? After a high school in Keller, Texas, refused to allow Casey Akers ask another girl to prom, her friends launched #LetCaseyPromposal hashtag to encourage the school to change its mind. The message has been gaining momentum ever since, and with good reason: If some students are allowed to make promposals, all students should be allowed to make promposals.

Casey recently shared her account of the incident with a friend via direct message; after asking Casey for permission to tweet it, the friend launched the story onto the Internet, which led to it going viral. According to Casey, she originally got clearance from school officials to ask someone to prom in the cafeteria during lunch, without mentioning the gender of the student she wanted to ask. She had a box of cookies and a poster that said, "Out of all these cookies, you're my favorite one. Prom?" The girl she was asking is named Cookie, which Casey wrote is where the idea came from. But as she was headed into lunch, school administrators stopped her.

It's a move that hasn't gone over well with students, at least if social media is any indication:

The Keller Independent School District in Keller has issued a statement saying that its decision had nothing to do with the gender of the parties involved; instead, it cited the fact that it is against policy to allow promposals on school grounds at all. The statement reads:

"Keller ISD does not grant permission for any student, regardless of gender, to conduct public prom invitations, or promposals, on campus during the school day. Any previous promposals that have occurred have done so without District approval. Promposals, and other similar public displays, may create a disruption to the academic setting, therefore they are not allowed for any student."

However, if Casey's story about initially getting clearance for her promposal is true, it seems that the ban on promposals is either very, very new, or hasn't been enforced prior to this incident. So is the case similar to when an Oklahoma state representative suggested banning all marriage in order to prevent gay marriage from becoming legal in the state? It does kind of feel that way. At the very least, it seems plausible that the administration, facing a wave of criticism and attention on and off social media, could have decided to implement or revive a policy against promposals to escape accusations of discrimination.

So will the administration back down? Hopefully. After all, LGBT students should be as free as anyone else to make big, romantic gestures. If a school wants to ban all promposals as inherently disruptive and actually enforce that ban equally, that's their right. If schools want to place limits on where and when and how promposals can happen or require students to get approval for their plans first, that's also their right (and also probably a good idea, considering). But what schools shouldn't be able to do is only bar certain students from making promposals, either through discriminatory policy or selective enforcement that only targets certain couples.

In other words, if the school has indeed allowed straight students to make promposals in similar fashion during lunch periods, then it definitely should #LetCaseyPromposal.