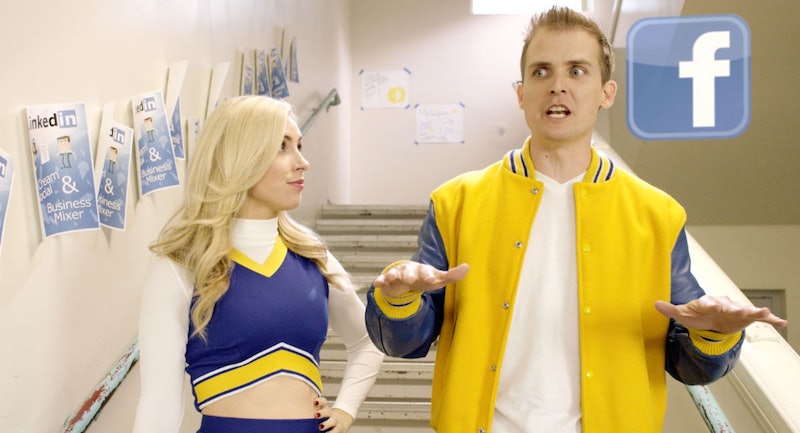 If you’ve ever felt like the Internet was kind of like high school—a sometimes-educational, but also sometimes-terrible place full of juvenile angst and rampant gossip—well, you’re not wrong. In a new video, Cracked imagines what the internet would be like if it were actually a high school, populated by websites instead of students and teachers. The central drama at the core of this video is the rumor that *gasp* Snapchat sent OKCupid a dick pick. The way each “student” reacts to the gossip reflects how different websites function: Twitter gleefully spreads the gossip with #CitizenJournalism; reddit adds conspiracy theories to the mix (while also declaring the pic a fake, of course); Wikipedia struggles to find sources; Vine tells the story over and over on a loop; and CNN believes whatever reddit and Twitter tell him. Hilarious or depressing? Maybe both. As Cracked tells us, the only difference between the Internet and high school is that “we’ll never graduate and be able to move far away. The Internet is forever. Well, until a massive electromagnetic disruption wipes out the Earth’s power grids…”

The Drudge Report and Huffington Post duke it out

Facebook is, naturally, the most popular guy in school

He spreads random info (“They’ve got microchips in the condoms everyone; don’t use ‘em!”), while Snopes debunks everything he has to say.

“I’m secretly smart but I pretend not to be—Just to be popular!”

Of course, the most fun aspect of the video is imagining how other websites would fit into this world. My additions would include:

The guy who is sometimes super helpful and sometimes really creepy, and who should, at all times, be checked for bedbugs.

That kid who’s always trying to sell you stuff to fundraise for school clubs and activities.

What’s that you’re asking? What about Bustle?