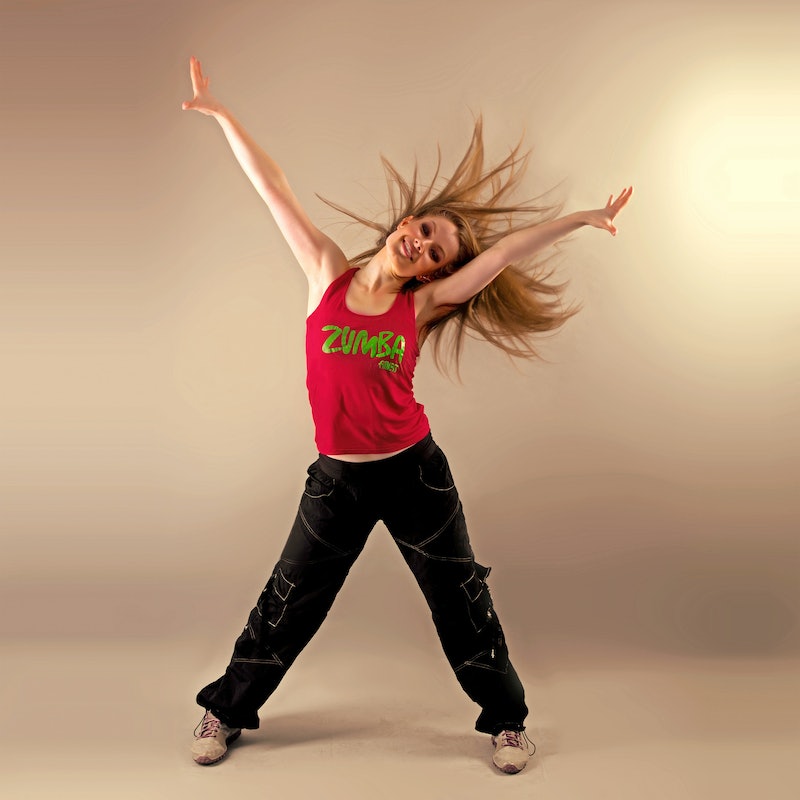 If you're a fitness buff with a particular taste for vintage, you're going to love YouTube channel benenden health's "100 Years Of Fitness In 100 Seconds" video. To demonstrate the various ways women's exercise habits have evolved, devolved, and continued to baffle over the years, they've compiled 100 seconds of depictions of the average woman's fitness routine spanning from 1910 to 2010.

What's most interesting, though, is that these trends also reflect the culture of each time; as the years go by, the screens flashing from decade to decade, regimens are more active, exuberant and fun, directly reflecting the slow development of rights that women were gaining. For perspective, we observe womanhood's progression from "stretching" (not hot yoga stretching, more like "I should probably make sure this ligament is still existent" stretching) as a primary source of exercise, to "Zumba," which as we know, seriously kicks your ass.

It's also relatively blatant that getting moving back in the day was more of a (dare I say?) sexualized performance than it is now; if these women were even drawing a sweat I'd be impressed, and the caliber of grace illustrated is second to none. The dawn of Jazzercise, in the 70s, seems to be the pivotal moment that rigorous routines were adopted, eventually allowing rituals like aerobics and Tae Bo to gain steam — the 70s were also a highlight of the Feminist movement.

Here are the decades depicted and what was happening for females during each:

Women were earning 12 shillings a year, couldn't vote, and were confined to a basic education in reading, writing and arithmetic.

Took a prominent spot in the work place during the Great Depression, demonstrating for the first time that women could fulfill the same duties that men could. Shocker.

Women are allowed to join the U.S. Navy for the first time and achieved a little recognition in the entertainment industry.

The concept of the nuclear family was pushed strongly by the government, giving priority to the "stay at home mom."

Though women still couldn't get credit cards or go to an Ivy League school, movements a la "The Feminine Mystique" began to change the way they saw their own sexuality.

The Feminist movement gains full steam; women gained the right to have abortions under the law.

The Equal Employment Opportunity Commission acknowledged and prohibited sexual harassment in the workplace for the first time; the first woman travels to space.

The Glass Ceiling Commission is founded, by the Department of Labor, to investigate what was keeping women behind. *eye roll*

Also, the glorious reign of the Notorious RBG begins, as she is appointed as Supreme Court Justice.

I'm not sure where I was or what this is, but 84 percent of women over age 25 received a high school diploma, marking this the first decade this stat matched that of males.

The movement for gender equality is stronger than ever; it becomes less than socially acceptable to relegate women to certain roles...aaand the first female president comes to term? :D

More like this
Black Women's Equal Pay Day Highlights An Upsetting Problem
By Brandi Neal
How To Politely Reject Someone Who Keeps Asking You Out
By Laken Howard and Lexi Inks
Here's What It Means If You See 888 All The Time
By Kristine Fellizar and Brittany Beringer
Here’s Your Daily Horoscope For October 4, 2022
By Mecca Woods
Get Even More From Bustle — Sign Up For The Newsletter