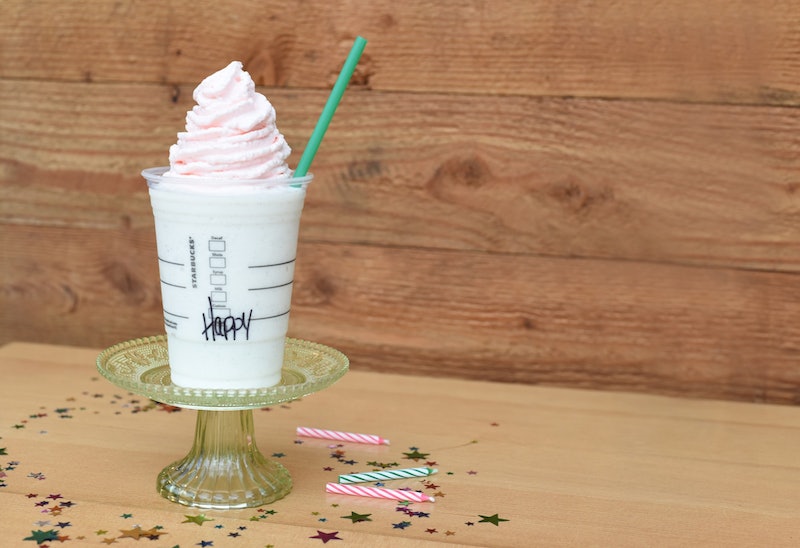 The Internet got quite excited earlier this week when Starbucks announced how it would be celebrating the Frappuccino's 20th birthday: With a limited-edition Birthday Cake Frappuccino. But while we were rejoicing, many of us also began wondering what exactly was in the drink — and perhaps more pressingly, is there caffeine in the Starbucks Birthday Cake Frappuccino? Although the press release about the drink and many of the articles written about it include what the special frapp tastes like, there doesn't appear to be an ingredients list for it anywhere on the Internet.

In an ideal world, solving this conundrum would have been simple: I would have simply gone to a Starbucks, ordered one, and both watched and asked the baristas what it was made of. However, because I live in the middle of nowhere, the nearest Starbucks is several towns away — and with the car at my boyfriend's place of employment with him right now, I've got no way of getting to it.

So instead, I fell back on good old fashioned research. I reached out to Starbucks to see if I could get an official answer, but while I was waiting for a response, Team Bustle tried a few other avenues of inquiry. If you just want the answer and don't care about how we got it, scroll all the way down; if you're curious about the magnificent goose chase we went on to find out, though, here's how it went:

Going into this whole adventure, my working theory was this: That the Birthday Cake Frappuccino does not have caffeine. How did I arrive at that theory? Simple: The flavor profile of the official version of the drink is identical to the “secret menu” version, albeit minus the raspberry whipped cream. As Bustle's Kathryn Katalia noted earlier this week, the treat has been available on StarbucksSecretMenu.net for a while; according to its instructions, all you have to do to get one is order a Vanilla Bean Frappuccino — that is, a non-caffeinated crème flavor — and ask the barista to add the appropriate amount of hazelnut syrup (one pump for a Tall, one and a half for a Grande, and two for a Venti). I have no idea why the resulting combination tastes like birthday cake, but maybe some things are better left unanswered.

Meanwhile, Bustle's Julie Alvin also called a local Starbucks to see if one of the baristas knew. Unfortunately the fellow who answered the phone wasn't super helpful; according to him, the Birthday Cake Frappuccino contains “milk, hazelnut syrup, and vanilla bean syrup.” What this description is missing, of course, is the same crucial bit of information that's absent from the official press blurb: What's the base of the drink? Is it a coffee-based one, or a crème one? Then again, I don't really blame the barista for his indistinct response; I'm sure he's got enough on his plate without having to field weird questions from random writers.

By the time we'd finished all this theorizing and telephoning, I finally heard back from Starbucks itself—which means that yes, I do have a definitive answer for you. According to a spokesperson for the company the Birthday Cake Frappuccino is “a Vanilla Bean Frappuccino crème blended beverage with hazelnut, and topped with raspberry-infused whipped cream.” The spokesperson added, “The beverage does not contain coffee.

So there you have it. The Birthday Cake Frappuccino is caffeine-free, so if you're trying to watch your stimulant intake, you can indulge in one without concern. I mean, it's still essentially a milkshake, so you probably won't want to go and order three in one day — but at least you can consume one after 2PM without worrying that it's going to keep you up tonight. Just remember that you've only got until March 30th to nab one.