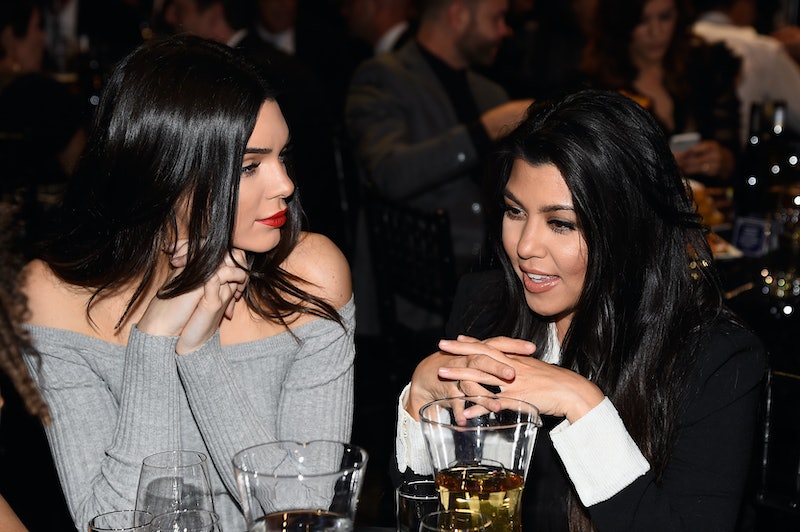 As you surely know by now, Kourtney Kardashian was spotted wearing Kendall Jenner's face on a t-shirt while out running errands. The Kardashians are one of the tightest-knit clans in Hollywood, frequently seen together both in the real and digital world, but this is the first time one has actually gone the extra mile of wearing their sibling's face on a piece of clothing.

In the past, the sisters have worn each others designs, supported their significant other's careers (be them musical or athletic), and even sported matching corsets, but now Kourt is taking sisterly love to the next level. The top is from Kendall and Kylie's limited edition apparel range for PacSun and is part of the collection's "selfie tee" line featuring a picture of Kendall riding down the beach on a white horse.

While I'm impressed by Kourtney's commitment to the Kardashian clan, she's by no means the first celebrity to sport a piece of apparel with a famous face on it (be it their own visage, or someone else's). In fact, I wouldn't even count this amongst some of the most iconic celeb-on-celeb moments. Here's the five most legendary times a celebrity wore a shirt with their own face on it.

Miley is the number one fan of all Miley-centric memes. Just take a quick scroll through her Instagram if you don't believe me. So of course the kooky pop singer would wear a t-shirt dress emblazoned with her own bedazzled face while performing during her Bangerz tour.

James Franco is deeply enamored with his own visage. His endless barrage of selfies (and now, pictures of the selfie t-shirt he made) should offer proof of that. So, of course, James had to take the next step in narcissism by wearing a button-down completely covered in a collage of his own selfie faces. James is an artist, after all, so all things meta like this just come naturally to him.

Macaulay Culkin wearing this t-shirt was the viral Internet meme that just kept giving. It all began when Ryan Gosling wore a top featuring a vintage picture from Life magazine of the Home Alone star. This encouraged Culkin to respond by taking a picture of himself wearing a t-shirt featuring Gosling wearing that shirt. The Internet took it from there ad infinitum, and thank god they did.

In what was quite possibly the most incredible and gratifying moment in celebrities wearing celebrities history, Nicolas Cage showed up to a Guns n' Roses concert wearing a t-shirt featuring a cartoonized meme version of his own face. The world will never be the same.

5. The OG of Wearing Your Own Face — Winona Ryder

Winona Ryder practically invented wearing your own famous face. Before "meme" was even a word, this "Free Winona" t-shirt was setting the Internet on fire after Ryder was arrested and sentenced to probation for shoplifting from Saks Fifth Avenue. Proving Ryder is the ultimate cool girl, the actress wore the t-shirt on the cover of W magazine, irrevocably cementing her icon status.