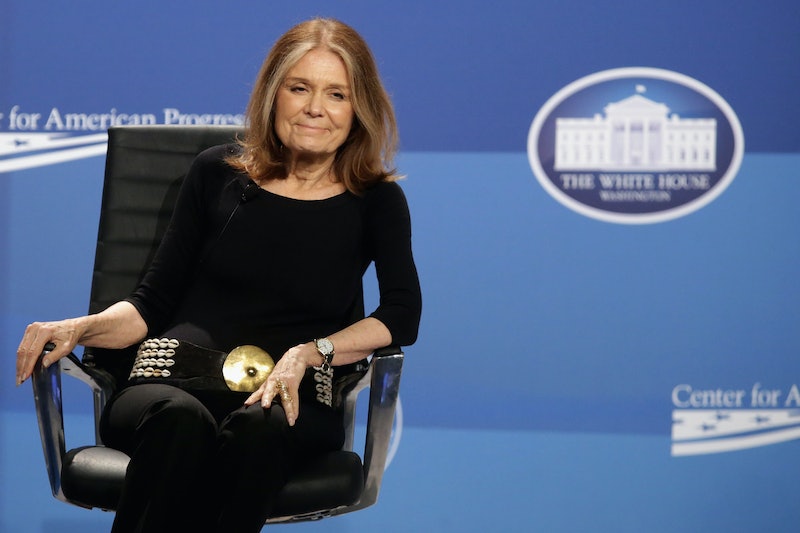 Despite the fact that the Women's Liberation Movement is largely agreed to have ended in the 1970s and I was born in the 1980s, my grandfather still refers to be as "a real women's libber." He usually does this the way you would say to a person who just ordered a banana, spinach, and broccoli smoothie with extra wheat grass, "Whoa! Look who's become a health nut!" Teasing, yet light-hearted and proud of you, but mostly just not at all getting why you're doing what you're doing. I'll remind him from time to time that "we're just called feminists now, Poppy," which usually results in this look that says, "Really? Because I don't see a shaved head and a shirt that says "I hate men"." My Poppy, like so many people, still don't quite get what being a feminist really means. So I'm thinking I can probably send him comedian Katie Goodman's song "Sorry Babe, You're a Feminist" to clear this whole thing up. (Dare I dream that this will make him realize that he is well on his way to being a feminist, too?)

Katie Goodman isn't the first to remind us that feminists are not simply ladies who enjoy "castrating men while wearing sensible shoes." (Although, to be fair, she might be the first to put it in exactly those terms, certainly, at least, to music.) For anyone who needs a refresher course on the definition of feminism, it is as follows:

No man hating, castrating, or fashion sacrifices required! Goodman even points out that there are lots of feminist men out there, too. It's pretty basic stuff. So why do so many people emphatically reject this label? (Goodman's video makes reference to celebrities such as Demi Moore, Kelly Clarkson, Carrie Underwood, Melissa Leo, Katy Perry, Kaley Cuoco, Lady Gaga, and Bjork eschewing the title.) My guess would be that the term has been co-opted for so long by people invested in women not being equal (and there are a lot of them) that it's given a lot of people the wrong impression. Fortunately there are the Goodmans of the world who can steer us back to reality.

Check out the full video below