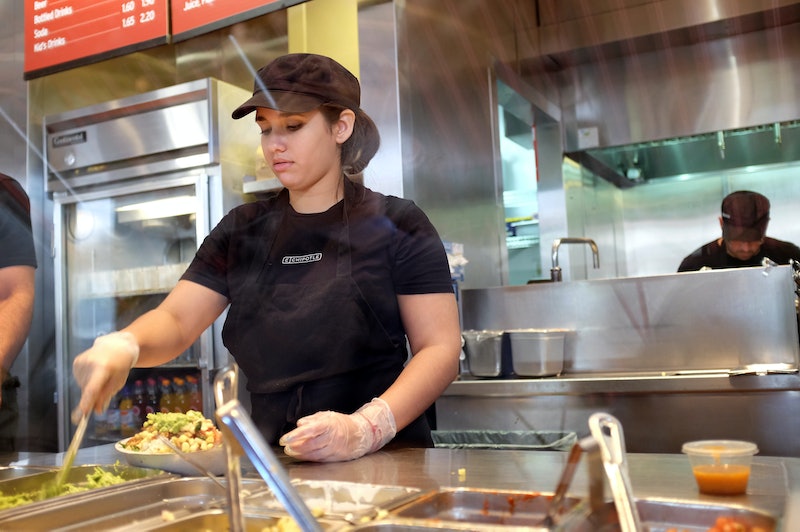 Even though our love of Chipotle outweighs any potential negative consequences (probably), that doesn't mean Chipotle hasn't been in the news--remember carnitasgate, or the infamous avocado shortage (and the subsequent freakout that Chipotle would yank guacamole from the menu altogether)? Well, it looks like we might have the next big Chipotle scandal on our hands (or do we?), and Twitter user @fuckboybobby has gone on a rant accusing Chipotle of skimping on the meat. Get your hashtags ready; #MeatGate might soon become a thing. Because, you know, even the most minor (or in this case, probably imagined) of controversies have to have the suffix -gate attached nowadays.

Now, every burrito lover knows that if you want double the meat, you have to pay extra for it, but that's not exactly the issue at hand here. He's also not simply mad that the Chipotle workers don't give you enough meat in the first place. No, the problem is something else entirely: according to Bobby, the Chipotle employees are putting meat in his burritos, then scooping some meat out when he's not looking, or as he calls it, "finessing the meat." I'm going to go ahead and assume this guy is not serious, but I mean, I guess you never really know with some people. Either way, Bobby went on a diatribe against Chipotle (because he's onto them and won't have his meat finessed, not up in here), and you can't fully grasp how hilarious it is until you read it.

Those animals! Smiling to my face while plotting to steal my meat behind my back!

Wait, we went from meat finessing to stealing utensils and napkins (which are free anyway)? Uh, okay.

No thanks, I think I'll just stick to asking for a cup for tap water, and then filling it with Coke Zero on my way out. Shh, don't tell! Don't tell Panera, either.

They say if you listen really quietly, you can still hear the sounds of an entire community's butts scraping against napkins made out of recycled paper.

Beware, Chipotle, because fuckboybobby is raising an army of hot sauce thieves, and they could strike at any moment.

These are the demands. You have 24 hours, or until the next time Bobby visits Chipotle.

More like this
TikTok's Butter Board Might Be The New Cheese Plate
By Emma Carey
On TikTok, Tinned Fish Date Night Is The Latest Viral Food Obsession
By Emma Carey
8 Completely Unserious Tips To Make Your Cuffing Season A Success
By Ginny Hogan
Deliveroo Is Selling Lotus Biscoff Cinnabons Now
By Darshita Goyal
Get Even More From Bustle — Sign Up For The Newsletter