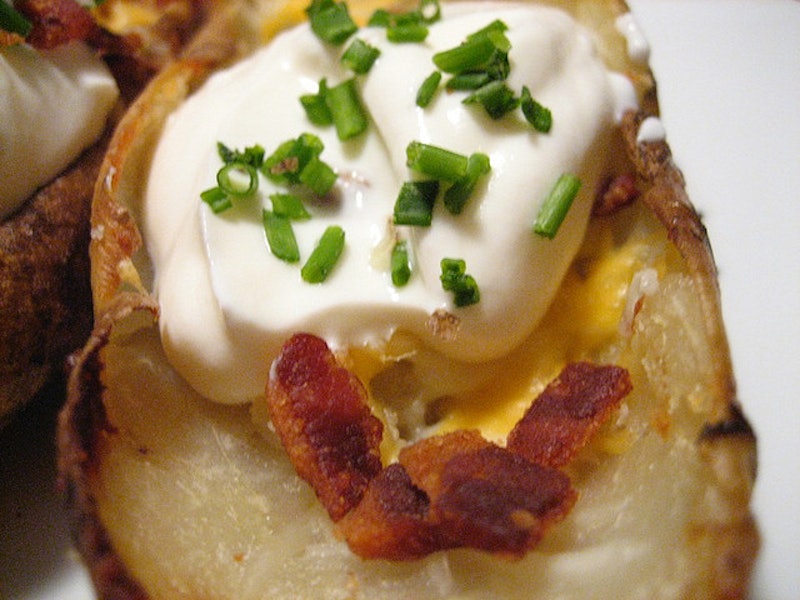 So you left food on a table where the dog could reach it, and then you're going to argue with the dog over whose food it was after he ate it? Not sure that's the smartest approach, but that's what this dad did in a video taken by one of his kids, showing him arguing with the family's husky. All you're going to do there is make the dog look cuter the more he argues with you. Come on, Dad, don't you know how dogs work?

It seems this dad and the family's husky were arguing over a potato skin. I mean, f you're going to get into a disagreement with the dog, maybe get mad when he tries to steal your steak, not your potato skin? Anyway, from the video shot by a family member, it's kinda hard to tell who is winning this argument. The crux of the dad's point revolves around things like, "You are a dog, not a potato skin-eating person," and "You don't get to say things like that," both of which are fair arguments.

While the dad talks longer, the dog might have given up just to stop all the yelling. In the husky's defense (can you tell I'm kinda on the dog's side here?) maybe don't leave food where the dog can get it? He's clearly a smart enough dog to try to argue his point, but the dad has to reinforce the "no food from the table" rule and remind the dog whose potato skin it is. Repeatedly. Eventually the dog gets sulky and curls up on his dog bed, clearly ALL DONE with you, DAD.

And even if we aren't sure what the dog in the video is actually "saying," research would support the theory that he just wants the human to shut up. A recent study found dogs prefer humans ignore them, rather than talk to them, even if they're being praised. What they like most of all is getting a good belly rub or a nice scratch behind the ears, rather than listening to people. Especially people who are shouting at them about potato skins. Probably.

What's interesting about this video is that the person who posted it said she disabled the comments on it "due to family requests." One can only guess what the comments looked like, since this is the internet, and outrage is only a click away. But this video doesn't seem to be abusive; While it's a robust argument, no one in the video is hurting the dog, just mildly annoying him. And I still think the dog wins the argument, because watch him curl up on his cute li'l bed. D'aww.