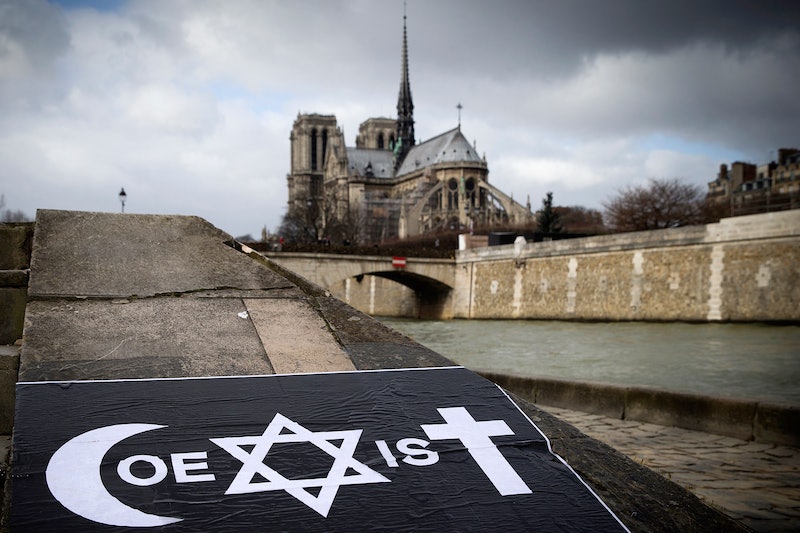 Based on a recent survey of US adults between the ages of 18 and 35 from the Public Religion Research Institute (PRRI), it seems that millennials don't think any one way about social issues. Overall, millennials are still divided on issues like abortion. But it also seems to be true that millennials are less likely to take black and white views of any issue. For instance, even though many millennials do not support abortion, they are far more hesitant than previous generations to label themselves as pro-life, suggesting that perhaps they take a more nuanced view of the issue than the pro-life movement historically has.

And nowhere is millennials' tendency to think for ourselves and reject black and white views more evident than in the survey's breakdown of the opinions of religious millennials.

Similar to other generations, the majority of religious millennials are Christian, but that doesn't mean their opinions on social issues is automatically conservative. When it comes to contraception, for instance, millennials are overwhelmingly unopposed, with 85 percent overall saying that birth control is either morally acceptable or can be right depending on the situation. Interestingly, though, majority support is also found among millennials in every major Christian denomination, even among Catholic millennials. Despite the Catholic Church's official position on birth control, 87 percent of white Catholics and 88 percent of hispanic Catholics say birth control is either morally acceptable or that it depends on the situation.

On homosexuality, religious millennials are less uniformly supportive, but a significant portion of millennials still report that they believe "sex between two people of the same gender" is morally acceptable, or can be depending on the situation. A majority of white mainline Protestants, white Catholics, and Hispanic Catholics are similarly alright with being LGBT, and support is lowest among white evangelicals, a demographic that is experiencing a marked decline.

And when it comes to perhaps one of the longest running, most religion-centric controversies of the past few decades — namely abortion — millennial Christians are more open to the idea than you might expect. A majority of millennials who identify as white mainline Protestants, black Protestants, white Catholics, or hispanic Catholics believe that abortion is morally acceptable or that it can be in some circumstances. Personal experience may be a driving force here; 8 percent of millennials in the survey reported they themselves had had an abortion and 36 percent knew someone who had.

But whatever the reason, it seems that religious millennials might not be quite as socially progressive as their religiously unaffiliated peers, but they certainly don't fit uniformly into stereotypes about conservative Christians. And that matters, especially since the shift seems to be driven by the overall millennial tendency to empathize more with others, leading to more flexibility on issues other generations have tried to cast as black and white.

“Part of what marks this generation is being willing to think empathetically and put themselves in another person’s situations,” said Robert P. Jones, the CEO of PRRI. “That’s kind of something different.” It's also, interestingly, something very Christian. So keep it up, Christian millennials!

More like this
The 19 Best Tweets & Memes About Bisexual Awareness Week
By Lexi Inks
Black Women's Equal Pay Day Highlights An Upsetting Problem
By Brandi Neal
This Psychological Effect Might Be Keeping You From Hitting Your Goals
By Lexi Inks
The 8 Best Crystals For Confidence, According To Experts
By Megan Gray
Get Even More From Bustle — Sign Up For The Newsletter