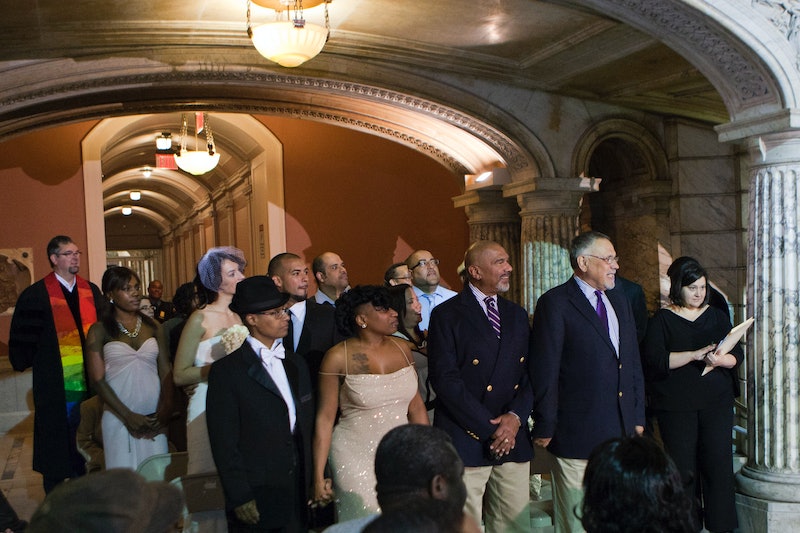 At 12:01 Monday morning, New Jersey became the 14th state to allow gay marriage, and same-sex couples began to have their long-awaited ceremonies. Nine couples were married by Newark Mayor (and soon-to-be Senator) Cory Booker just after midnight at Newark's city hall — but the rush wasn't just about excitement. Unlike other states to have recently legalized gay marriage, this milestone was expected to be temporary, thanks to Governor Chris Christie's push to appeal the court's September ruling. But on Monday morning, Christie asked Attorney General John Hoffman to withdraw the state’s appeal of a ruling, ensuring gay marriage will continue in New Jersey.

Booker, who was elected to the U.S. Senate last week, performed the marriage ceremonies for the first time in his career Monday, saying, “I’ve refused to preside over any kind of wedding in seven years as mayor. If I couldn’t treat every citizen equally, I just wasn’t going to do it. It would be an affront to the principles I believe in.”

“I wouldn’t be where I am if people before me didn’t stand up for the same principles and ideals about how we’re all supposed to be equal in this country under the law,” he added.

Although the governor strongly disagrees with the court substituting its judgment for the constitutional process of the elected branches or a vote of the people, the court has now spoken clearly as to their view of the New Jersey Constitution and, therefore, same-sex marriage is the law..The governor will do his constitutional duty and ensure his administration enforces the law as dictated by the New Jersey Supreme Court.

It's a huge turnaround from last month, when a state court's ruling to allow same-sex marriage was quickly appealed by Christie, who was hoping to delay the implementation date, and buy more time to overturn the legislation completely. On Friday, the state Supreme Court rejected Gov. Chris Christie’s request, announcing instead that it would allow gay marriage.

“The state has advanced a number or arguments, but none of them overcome this reality: Same-sex couples who cannot marry are not treated equally under the law today. The harm to them is real, not abstract or speculative,” Chief Justice Stuart Rabner of New Jersey’s Supreme Court wrote on Friday.

As far as we're concerned, anyone who even tries to appeal this decision should have to answer to Mr. Soprano himself.