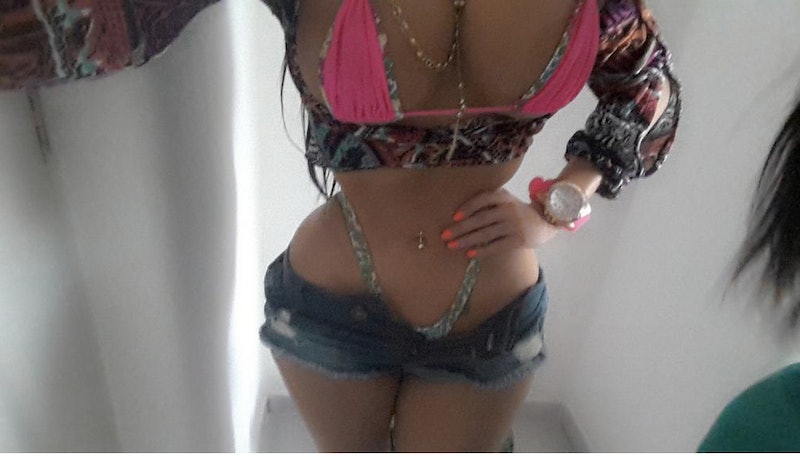 Move over Kim Kardashian, you have some competition when it comes to your corsetry. News spread last year that the reality television star was a part of the latest get-fit trend known as waist-training, in which anyone who dares to return to the 18th century wears a modern-day corset for a few hours a day. However, the trend has now taken to new extremes, as this woman has been wearing a corset for the past six years to achieve a 20-inch waist. Yes, you read that correctly.

According to Cosmo , Aleira Avendaño is a 25-year-old Venezuelan model who has already had her share of body augmentations. She has had three breast implants to boost her cup size to a whopping 34DD, and she has had plastic surgery on her mouth, nose and posterior. Her waist, however, is what is gaining her the most attention with rumors spreading that if she turns to the side, she somewhat disappears. Optical illusion? Not so much.

In order to be the master of the disappearing act, Avendaño has put herself through some extreme measures for the past six years. She says that she wears a corset for 23 hours a day (just to refresh your memory, there are total of 24 in a day), and only takes off the corset to wash herself and rest for an hour. In a video by Barcroft Media, she says that it is like her "second skin," and that she lives in it. Although a doctor in the video suggests that she puts an end to the madness, she won't budge. Her goal, she says, is to be "very well known for my body."

A quick Google search will prove that extreme body augmentations have indeed preceded Avendaño's. For example, Claire Leeson went $30,000 into debt to get plastic surgery in order to become a Kim Kardashian lookalike. And Alina Kovalevskaya has risen to fame for looking like a "human Barbie doll." Avendaño's goal to achieve her super thin waist joins the ranks of these two and many others who have gone to extreme measures to achieve a desired look.

More like this
Ciara On Her Biggest Skin Care #Fail
By Rachel Lapidos
Early 2000s-Era Rhinestone Tattoos Are Back, Baby
By Jordan Murray
Berriez Founder Emma Zack On Her Size Inclusive NYFW Show
By Dominique Norman
The Best Plus-Size Looks From New York Fashion Week
By Dominique Norman
Get Even More From Bustle — Sign Up For The Newsletter