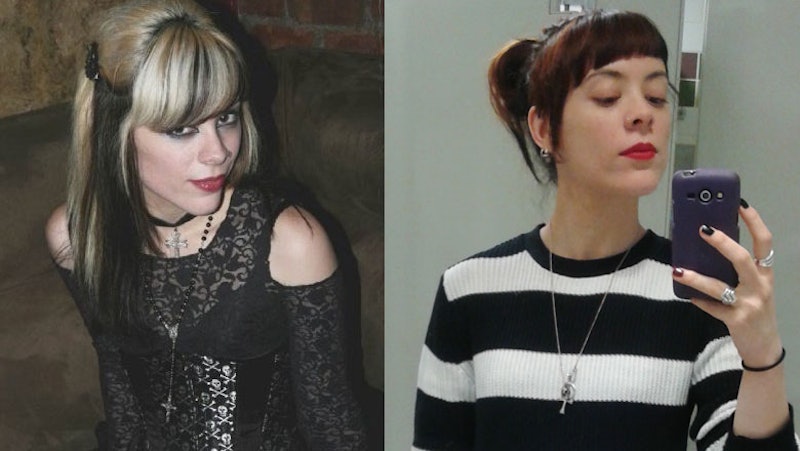 I recently read an article about how working in an office made one woman lose her personal sense of style, and it got me thinking, "I have expressed myself through clothing for as long as I can remember." My mom allowed me to start dressing myself when I was really young, and I approached the responsibility with the kind of reverence that can only be felt by a five-year-old. I color coordinated meticulously, even if that meant wearing three clashing shades of neon at once — at least my neon pink socks matched the rims of my heart-shaped sunglasses perfectly.

As I got older, my sartorial choices became pretty closely tied to my music preferences, and over the years my style has been imbued with elements of grunge, metal, goth, punk and rockabilly. Through high school, college, and beyond, my closet was chock full of black lace, leather and velvet, skulls, plaid, leopard print, spikes, chains and lots of crosses, and my hair has been just about every color of the rainbow. Sporting alternative fashion was never part of a rebellious or attention-seeking phase for me, but rather, I genuinely identified with various subcultures from a young age, and chose to express myself in part through my physical appearance. For all these reasons, the simple quotidian act of getting dressed has always been fun for me; it’s like I get to pick a whole new aspect of my personality to display each day through the clothes I wear.

I’m in my early thirties now, and have a full-time corporate job at a somewhat conservative mainstream publishing company in New York City. The dress code is “corporate casual,” which, granted, saves me from the world of power suits and tweed, but nonetheless presents some constraints based on what’s considered socially acceptable in an office environment. And despite the fact that I live in New York, where the unspoken working woman’s uniform is head-to-toe black, I can safely assume that my co-workers’ version of head-to-toe black isn’t quite the same as mine.

I've worked in many different environments where my appearance was never an issue, but the phrase “corporate casual” was a mystery to me. I distinctly remember the sense of panic I felt when I got called in to my first interview. What the hell was I supposed to wear?! I wanted to nail the interview, but there was no way I would feel the confidence I needed to do so without being myself. And being myself meant dressing like myself, partially shaved head and all. I had, however, watched The Devil Wears Prada on more than one occasion, and had nightmare visions of judgmental editors making assumptions based on how I looked because it was obvious I wasn’t “one of them.” I told myself they would be free to do that later, as long as I “passed” enough to get the job.

I ended up wearing a plain black dress and a black-and-white patterned cardigan I found in the back of my closet. I accessorized with a beige studded belt my mom had given me. I also went out and bought what was probably my first pair of nude pantyhose since junior high school prom. I flat-ironed and parted my hair so you couldn’t tell there was a section of it missing, and took my nose ring out for the day. I got the job, obviously, and I congratulated myself on convincingly infiltrating the world of normalcy. I was pretty broke at the time, so I couldn’t afford to buy myself a whole new wardrobe, nor was I about to go on a shopping spree at the Gap or J. Crew just to fit in. Instead, I carefully curated my work outfits every day to be the most toned-down and “professional” versions of myself that I could muster.

As the months went on, and I got more comfortable, more aspects of my personality started creeping back into my daily wardrobe. This isn't to say I let my freak flag fly — but I did start incorporating odd little details into my outfits. While my work closet is mostly made up of monochromatic staples, one of my favorite work shirts is a button-down I bought ages ago at H&M; the print on it looks like a regular black and white floral, but, if you look closely, you notice insects and spider webs throughout. When worn with a black pencil skirt and booties, the overall effect is put-together and professional, but it's still decidedly "me."

While others might save their creativity for the weekends, I prefer to look in the mirror every day and see myself rather than everyone else.

I also wear a lot of funky jewelry pieces, like this silver spine necklace by indie jewelry designer VeraMeat; I love how dainty it is, and I get compliments on it by even the most tight-laced veterans at my office. I wear my hair up most days, which makes it slightly less obvious that my haircuts are frequently asymmetrical or that I have colorful streaks hiding in my hair. Despite being at the company for over a year, I nonetheless strive to not actually stand out too much, and allow my work to do most of the talking. But it can be pretty challenging when your idea of “normal” is most people’s idea of “weird.”

All that being said, I have had some awkward encounters. One time, I met some co-workers after work for another co-worker’s going-away party.

“Ohmigod, your scarf is so... morbid,” said one particularly mainstream office mate when she noticed the black silk scarf with purple skull print that I was wearing.

My knee-jerk reaction was, this is Alexander McQueen! Of course it’s morbid! But, instead, I looked down and tried to see myself through a different lens. I had thought skulls were a common enough motif by 2014, considering they’d been selling similar items at places like Forever 21 for the past few years, but perhaps it was still a little too edgy for some people. A (very small) part of me started reconsidering that J. Crew shopping spree.

Other times, though, I am surprised by compliments on my unique style, and on more than one occasion, an office mate has wistfully mentioned how they wished they could "pull off" something or other that I am wearing. One time a co-worker caught me putting makeup on in the bathroom as we were heading out for the day and remarked on how I reminded her of a comic book character when I had eyeliner on. “I mean it as a compliment!” she said, and I assured her that, to me, it was.

Ultimately, despite not quite fitting into the culture of my corporate office, I’m very good at my job. I was promoted in under a year, and given my own office. And while some might argue that my life would be a whole lot easier, and I might be way more successful, if I would just dye my hair all one color, or stop wearing jewelry made of silver-plated animal bones, or wear just a little bit more beige, I’m perfectly alright with being the fashion outsider at the office, as long as my actual work is appreciated.

My unconventional aesthetic has allowed me to meet so many incredibly interesting and inspiring people in my everyday life outside of work, and I would not trade that for the potential comforts of "fitting in." While others might save their creativity for the weekends, I prefer to look in the mirror every day and see myself rather than everyone else.