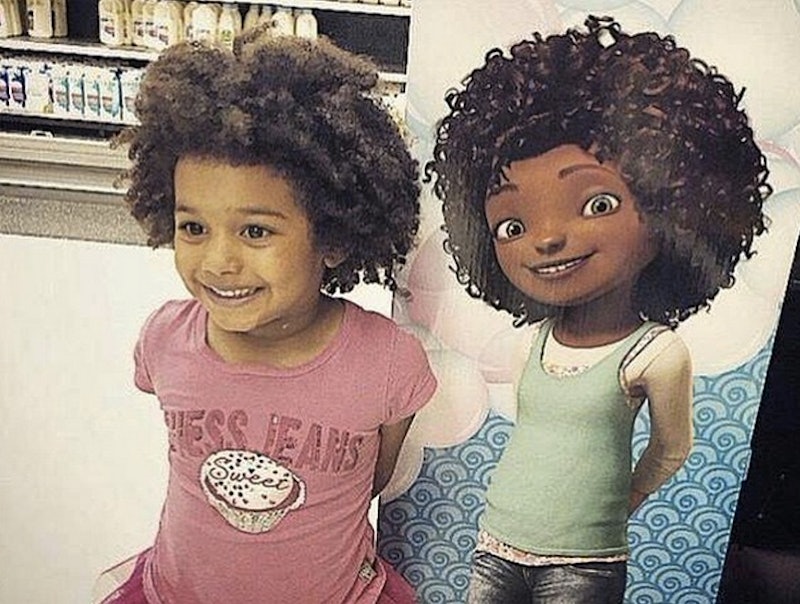 Starring Rihanna, Jim Parsons and Steve Martin, Home opened to sky-rocketing numbers at the box office this weekend, bringing in $54 million and counting. Couple that with the fact that the film's main character is played by our favorite gal, RiRi, and that her character has a head full of insanely beautiful bouncy curls, and you certainly have reason to clap. I might be an adult, but I seriously can't wait to see this film — especially being a girl with a head full of bountiful natural hair.

My heart seriously melted when an image surrounding the film went viral a few weeks ago. On Instagram, actress Teyonah Parris posted a photo of a little girl with natural hair standing next to an advertisement for the film Home. The caption read, "Representation Matters," and I couldn't agree more.

Growing up, you don't catch on too quickly about how much people don't look like you. However, that is not to say that the innocence of little girls is not wildly affected by what they see and hear. Sure, mainstream popular culture is still trying to find its balance with achieving equal representation when it comes to the amazingly beautiful women that live in all corners of the world. But growing up, the only thing that I can remember is fairy tales filled with princesses and superheroes that looked nothing like me, causing me to feel the need to adjust myself to fit within the standards of the mainstream.

I've always had a head full of thick, natural hair, and though I've come to see it as my crown and glory in my adult life, my biggest goal was to keep it straight and in line during my years in elementary school and for the latter part of high school. My mom kept my bookshelves filled with books that were about girls with hair that looked like mine. However, that still didn't make me comfortable enough to find pride in what I see now as amazingly cool tresses.

However, at a certain point, I became comfortable. I was a junior in high school and began to see images of beautiful, cool, hip girls taking pride in their natural hair and I allowed myself to break free from the images that I had been forced to accept and found pride in just being me. Now, I wear my hair in a multitude of ways, and I've come to love the versatility of it all. But it was all a learning process, involving me searching in places that weren't readily shown in the media because I still wasn't seeing reflections of my beauty in mainstream culture.

When Disney finally cast its first Black princess, Tiana, in The Princess and the Frog, I was elated. The movie came with its complications and controversies, but nevertheless I was happy that my little sisters and cousins were seeing a fairytale with a princess that looked like them. The wheel of fair and accurate representation is moving just as slowly in fashion and beauty as it is in Hollywood's kids films, but I'm happy that the wheel is at least moving, even with instances that aim to stop its progress.

Last month saw the wrath of what happens when representation is not achieved. Giuliana Rancic thought it funny to say that Zendaya Coleman looked like she smelled of patchouli oil and weed because she chose to wear dreadlocks on the red carpet. Solange Knowles, who is often celebrated for her natural mane, was the subject of sour prejudices when InTouch said she looked like a dog. These comments not only hurt those who they were being hurled at, but also the countless girls looking up to them for motivation to embrace who they really are.

Tip, in the movie Home, is Dreamworks' first leading Black character, and Rihanna being her voice over is just as commendable, as the singer recently became the first Black woman to score her own Dior campaign. With the little girl gleaming brightly next to that Home advertisement, I can't help but to consider this film one small step for mankind. Let's just hope that many more are to come.

More like this
The Chicest ’90s Updo Hairstyles To Try
By Paris Giles and Rachel Lapidos
'The Parent Trap's Elizabeth James Was Basically Princess Diana & These Looks Prove It
By Orla Pentelow and Claire Fox
Lindsay Lohan & Jonathan Bennett Celebrated Mean Girls Day Very Differently
By Jake Viswanath
The 6 Best Bangs For Round Faces, According To Stylists
By Jordan Murray
Get Even More From Bustle — Sign Up For The Newsletter