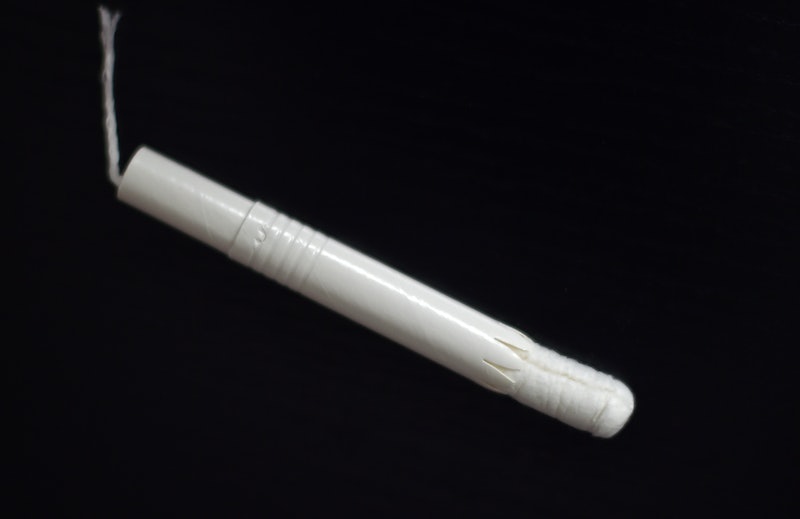 Although endometrial cancer is one of the most common cancers in the United States, there's no routine way to screen for the disease, but thanks to new research, that may not be true for much longer. In fact, you might have the tools for early detection sitting in your purse right now; according to a new study, tampons can help detect endometrial cancer. Currently, according to the American Cancer Society, the best way to detect the cancer is to keep an eye out for any weirdness going on downstairs, like abnormal vaginal bleeding or discharge, which means that it's frequently already in the early stages when it's detected. Thanks to Jamie Bakkum-Gamez's work at the Mayo Clinic, though, that stands to change. The study looked at tampons from 66 women, 38 of whom had endometrial cancer, and 28 of whom were cancer-free, Jezebel reports. After isolating the DNA from the samples, the researchers found evidence of methylation, a common marker for cancer, in the genes of women with endometrial cancer. Most importantly, according to Smithsonian, these are the same results detected by a much more complicated (and invasive) procedure, endometrial brushing, in which a “wire brush is used to scrape cells from inside the uterus," which will now be featuring in my nightmares for the next week. Thank you, science.

Bakkum-Gamez says an at-home testing kit won't be hitting the shelves anytime soon, but they're collecting samples for further research and things are looking good. In the meantime, endometrial cancer is relatively rare in women under age 45, but that doesn't mean you get to skip your annual trip to the OB-GYN. Look, even Demi Lovato wants you to take care of your lady parts.

If that's not a good enough reason to deal with a Pap smear, I don't know what is.