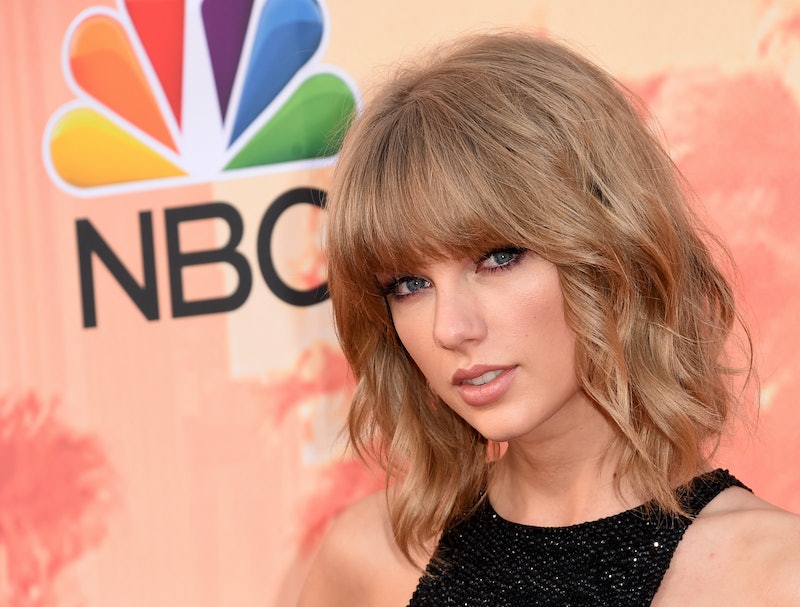 If you can count on anyone to rock a mini dress, clearly, it's Taylor Swift. Swift attended the iHeartRadio Music Awards on Sunday night in a little (emphasis on little) black dress that was anything but basic.

The "Blank Space" singer, who is nominated and presenting at the 2015 awards show, walked the red carpet at the Shrine Auditorium in Los Angeles, and took another opportunity to remind us all why exactly her legs are worth $40 million. And even though an LBD might seem a bit boring for a music awards show, Swiftie's KAUFMANFRANCO number certainly dispelled that notion. The black mini dress was sleeveless and full of sparkles, with some side cut outs for a bit of edge (and a bit more skin), and she paired it with strappy, black Tamara Mellon heels. Tay ditched the red lip and opted instead for a dark and smokey eye, and had her blonde bob styled in shaggy waves.

It's not my favorite look I've ever seen her in, but it did the job and made her look like the glittering star that she is. And really, who's looking at the dress when she's got her legs on display, anyway?