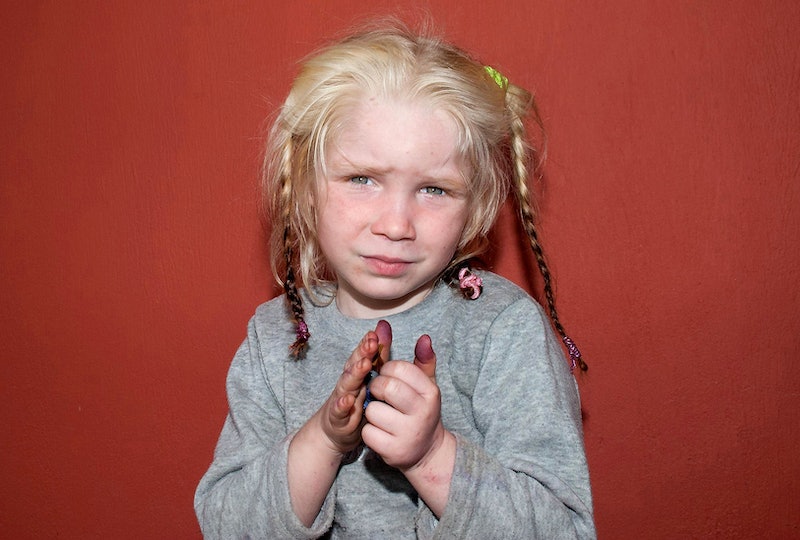 A young girl named Maria, who has blond hair and blue eyes, was found last week during a raid on a Roma, or Gypsy, camp in Greece. Authorities were first struck by how she looked nothing like her parents, and a DNA test confirmed that she is not related to them. The 40-year-old woman and 39-year-old man were charged today with abduction.

According to BBC News, the Roma couple claims that Maria's biological mother gave her to them because she could not take care of the girl. "Our clients' claim is that 'we never abducted this child we just adopted her' in a way that was not legal, that we can confess," says the couple's lawyer, Kostas Katsavos. He also says they are currently searching for the girl's biological parents.

But the couple has further discrepancies that complicate the case, including registering children with multiple agencies. "The Greek authorities say the couple were in possession of false papers which suggested the woman had given birth to six children within a 10-month period," according to the BBC. Authorities were even unclear about the woman's real name. "Police named them as Christos Salis and Eleftheria Dimopoulou or Selini Sali — as the woman had two separate sets of identity papers," according to the Associated Press. It was later confirmed that the woman is Eleftheria Dimopoulou.

The girl was first thought to be around four years old, but now her age is placed around 5-6, according to the Smile of the Child charity in Athens, which is taking care of Maria. The charity reports that it has already received about 8,000 calls in response to the girl. Authorities are working with Interpol, but a search has yielded no leads so far.

Members of the Roma camp, located in the central Greek town of Farsala, was initially raided for drugs and weapons, according to the BBC. Already stereotyped for centuries as thieves and beggars, the Roma community is now facing child-trafficking claims. But they insist that the girl was taken care of well and was part of the family.

"At this point, we can't say there is a child trafficking network involved, but we are looking at this possibility," regional police chief Lt. Gen. Vassilis Halatsis says. The couple received about 2,500 euros ($3,420) a month from the Greek welfare system from three different cities.

“This case is now giving hope to parents of missing children,” says spokesman Panayiotis Pardalis of Smile of the Child, the Greek charity. It particularly resonates in the Madeleine McCann case, where a 3-year-old went missing from a resort in Portugal in 2007, a spokesman for the McCann family says.