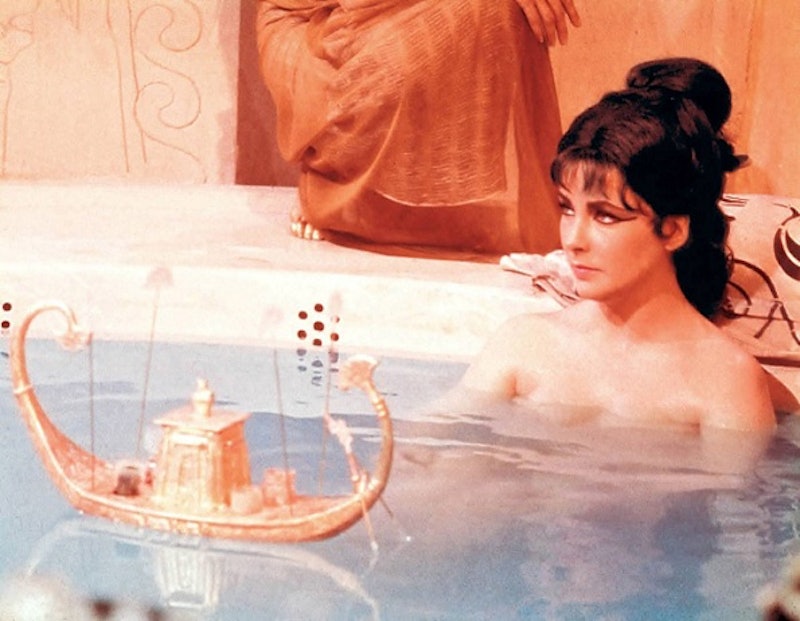 Think you're being daring by adding a little honey to your bath? Amateur. History is full of people (usually famous and rich) who decided to spice up their bath time with peculiar ingredients, from the pretty and scented ... to the frankly rather dangerous. So if you're feeling worried about your own decadence because you scattered rose petals on the water and placed a little candle on the side, you have nothing to worry about. You aren't even scratching the surface of history's most opulent — and disgusting — baths.

But first, let's get one thing straight: bathing isn't a modern phenomenon. There's a myth that after the "golden age" of bathing in Roman times, where they built gorgeous bathing complexes all over their Empire, baths died out, leaving people in Western Europe to scrub themselves with linen and get anxious at the sight of water until the 18th century. However, this is total nonsense; while the Middle Ages might have smelt particularly bad, it wasn't because people didn't bathe. (And the famous letter from an Italian diplomat reporting that Elizabeth I bathed once a month, "whether she needs it or no"? It was just meant to reassure his boss that Elizabeth wasn't ill; baths in Elizabethan England were often used for medicinal purposes, not just for getting clean.)

Eastern Europe, of course, has had a strong history of bathing for centuries, from hot springs to hammams. And while showers have taken over here, baths are still a strong part of rituals in other cultures: in parts of Japan, the winter solstice is marked by sitting in baths filled with yuzu, an orange citrus fruit; while practitioners of shamanic medicine in Peru use baths filled with ritual flowers, or "banos florales," in ayahuasca ceremonies.

But there have been some fairly disgusting, decadent, and outright bonkers bath additions over the centuries of human history. So take a tour with me: you'll never look at your bath bombs as an outrageous expense ever again.

9. The Wheelbarrow Of Crushed Strawberries Bath

This is the ultimate in decadence: Therese Tallien, the wife of the French Revolution political figure Jean-Lambert Tallien, used to take some pretty fruity baths. It's commonly agreed that her baths included 22 pounds of crushed strawberries, with a few pounds of raspberries thrown in, designed as a skin exfoliant and moisturiser. Considering her husband and his mates executed Marie Antoinette for her arrogant opulence, including daily baths filled with sweet almonds, lily bulbs, and candy paste, this seems a bit rich — in both senses. (Also, yeast infection much?)

Mary Queen Of Scots, before she had her head cut off by Elizabeth I, liked to literally pickle herself: she allegedly bathed in huge amounts of sweet white wine. The thinking behind this was apparently the drowning of parasites such as lice, but it equally could have been made up by Mary's political enemies to make her look ridiculous.

Benjamin Franklin was famous for this one: he threw open the upper window of his famous property, Monticello, every morning and stood in front of it in the nude, allowing the air to circulate over his body. The "air bath" was part of his theory that fresh air was actually good for you, but it probably seriously startled the servants.

Among the many unsubstantiated rumors about the "first ever dandy," Beau Brummell — an English 18th century gentleman who became famous for how beautifully he dressed, and was the first street-style star — is said to have bathed in a mix of 100 eggs daily. Myth or not, we do know Brummell was famously stringent in his bathing habits (he was among the first people to recommend bathing every day, and refused to perfume himself afterwards).

Donkey's milk was part of the bathing arsenal of the rich and decadent for centuries. Cleopatra was alleged to bathe in a mixture of it, and Elizabeth I of Bavaria was supposed to do the same (though it now seems that she actually used olive oil instead, which is only slightly less disgusting) — but it was Emperor Nero's wife Poppaea who took it to the furthest extreme.

According to Pliny the Elder, she insisted that a herd of donkeys accompanied her on trips, so that she could have a donkey's milk bath wherever she went. As it turns out, donkey's milk is actually the next healthiest for human consumption after breast milk, and is currently enjoying a vogue in Korean beauty products — so this one, while it's odd, is at least not harmful.

This is exactly what it sounds like. Take peat, which is decayed organic matter that builds up in huge muddy mires and bogs, pulp it a bit so that it's not a gigantic lump, add to your bath, and apparently, enjoy a host of health benefits.

It's motivated by roughly the same idea as mud baths, but with a much weirder smell. The origins are a bit obscure — there's an unsubstantiated idea that Napoleon's brother set up the first peat-focussed health spa — but the bath has certainly been around in Central Europe for centuries. (A Czech spa that offers them also has a "peat pulp tampon" service. Use your imagination.)

This may have been a rumor, but it's too entertaining to leave out. The very proper and respectable John Law, a Scottish economist in the late 1600s-early 1700s, was alleged by the popular press to bathe almost entirely in veal broth. Why wasn't explained. (They also said that he bathed in 100 eggs, like Brummell, so bizarre bathing habits may just have been a standard way of being rude about people in the press.)

Nikola Tesla is now famous as a celibate genius who invented, amongst other things, alternating current — and he predicted great things for electricity when it debuted. One was that it could be widely available in "clouds," but another was that it could give you baths without the necessity of water.

In 1924, he described to a newspaper the process of standing on a specially designed metal plate naked, while an unspecified number of volts ran through his body. He described it as being "enveloped in cold fire." Perhaps unsurprisingly, it didn't catch on. (For obvious reasons, neither did adding electricity to your bath.)

1. The Blood Of Virgins Bath

Ever wondered who the most prolific serial killer in history is? It's generally agreed that it's probably a woman: Hungarian countess Elizabeth Báthory de Ecsed, who tortured and killed nearly 500 young women over the course of her life in the 1600s. (The exact figure is unknown — at one point in her trial, it was alleged to be 650.)

Among the many legends that have sprung up around her reign of terror was the rumor that she bathed in the blood of her victims to retain her youth and beauty, though this is unsubstantiated. We do know she ate them, though, which is probably bad enough.

More like this
You Can Stay At The 'Hocus Pocus' House On Airbnb
By Alexis Morillo
Craving The Beach? Here's Your Guide To A Solo Vacation In Turks & Caicos
By Alexis Morillo
5 Ways To Help People Impacted By Hurricane Ian In Cuba & Florida
By Emma Carey
Chelsea Clinton On The Best Advice She Ever Got From Her Mom
By Brianna Kovan
Get Even More From Bustle — Sign Up For The Newsletter