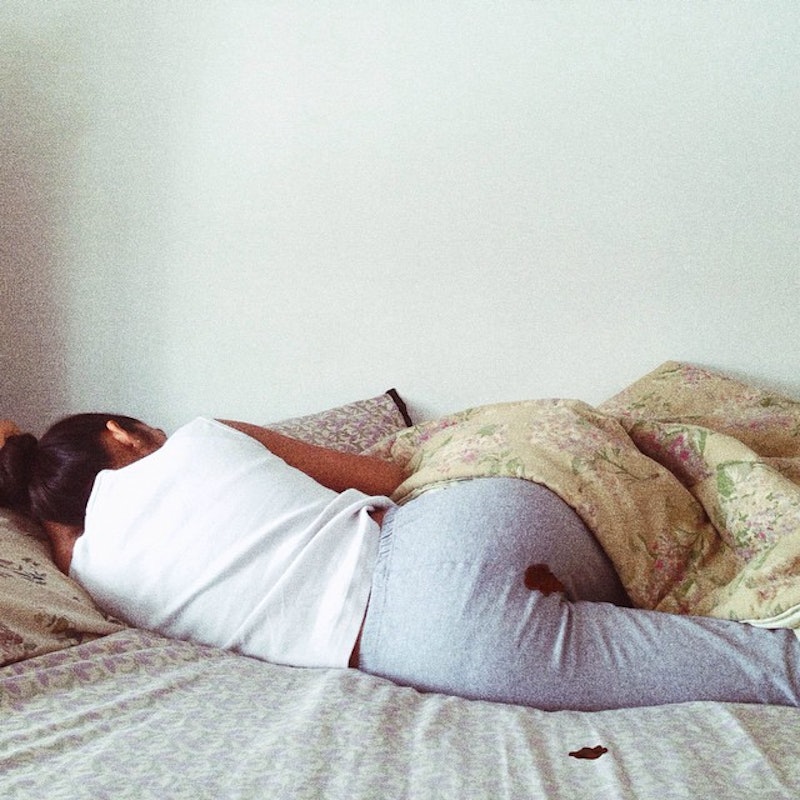 It's a day ending in "y," so it must be time for yet another Instagram controversy about photos of women's bodies. This time, the site targeted Rupi Kaur, an artist whose Instagram photo of a woman in pants stained with menstrual blood was yanked from the site twice last week. (The site later apologized and said the picture had been removed, twice, by mistake.)

Though Kaur's photo was reposted after massive public outcry, she still joins the ranks of Chelsea Handler, Scout Willis, and hundreds of other women who've had honest photos of their bodies deleted from the site after being cited for violating Instagram's community guidelines. In case you've never read them yourself, the site's guidelines explicitly ban nudity, mature content, gore, and material encouraging eating disorders, and go on to note that “if you wouldn’t show the photo or video you are thinking about uploading to a child, or your boss, or your parents, you probably shouldn’t share it on Instagram.”

Which would be one thing ... if Instagram users (and community guideline enforcers) actually stuck to these guidelines. But they don't. I spent an hour on Instagram this morning, and I saw people share pictures of things that would cause your child/boss/parents to go crawl under the porch to calm down for a few hours. I saw boners. Miles and miles of boners. I saw vulvas, sexualized breasts, and simulated sex acts. I saw heartbreaking pro-anorexia collages. I saw photos filled with so much real blood, they made me nauseous.

The photos below have every right to exist on Instagram — but to argue that they are appropriate while Kaur's photo was scandalous is just ridiculous.

Kaur's photo of a woman's pants with dried period blood was banned, and only restored after fans and news outlets around the world rallied around the photo.

...But Not Other Types Of Blood:

...But Not Boobs With Cartoon Stars

This photo of real breasts didn't get anyone suspended from anything.

Sometimes it seems like Instagram is full of nothing but butts — so when vlogger and musician Meghan Tonjes had a very tame photo of her butt removed from her profile in May 2014, she figured that it was due to her plus size figure. Tonjes' photo became part of a national discussion, and after her story was featured on the Today show, her photo was reinstated.

Comedian Chelsea Handler got busted by Instagram more than once for going topless in a number of relaxed and non-sexual photographs — including this hilarious parody of Vladimir Putin, which I don't think was created to get anyone's motor running.

...But Not Serious Sexy Photos

This shot of someone preparing to diddle their skittle (which was definitely created with the intention of getting motors running) is totally kosher.

5. They Banned Pictures of Nude Breasts...

Rihanna had several photos banned from Instagram, including a shot of herself posting topless on the cover of French magazine Lui. In fact, after the site deleted the post, they sent Rihanna a personal email asking her to keep her clothes on in future pictures. It was enough to make the singer take a six-month hiatus from Instagram.

...But Not People Who Are Gross About Them

But I mean, they had to ban those pictures, because Instagram is not a place where people objectify breasts. All of Instagram is appropriate for families. It's basically Sesame Place up in there. Right?

Scout Willis was among the first people to bring public attention to Instagram's ban on female toplessness, through her work with the #FreeTheNipple campaign, as well as posting numerous photos of herself running mundane errands in public while topless. But her behavior got her kicked off Instagram, because, hey, nipples are inherently sexy, even when you're just grocery shopping. Instagram must protect us from them, lest our passions become too inflamed and we begin rioting in the streets!

...But Not Pictures Of Taking Off Your Panties In Private

But thank god our right to post photos of us seductively removing our panties isn't under fire!

7. They Banned Modeling In A Shirt That Shows Your Nipples...

Model Anja Rubik posted a picture of herself walking the runway at a fashion show in a sheer top, and got her photo banned from Instagram for her trouble.

...But Not Modeling Everything But Your Nipples

...But Not Waxed Crotches

This hair-free crotch, on the other hand, has the subject of neither banning nor public outcry — because pubes count as "mature content," but waxed bald vulvas are just all-American fun!

...But Not Erect Penises