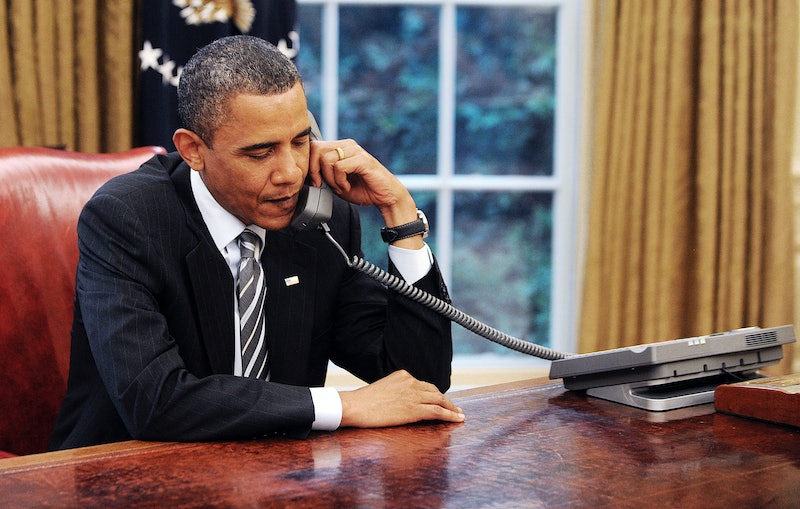 President Barack Obama addressed a waiting crowd in the White House Rose Garden today in a two-pronged defense of Obamacare Monday. 1) The Affordable Care Act is a great product, but, yes, the exchange website is buggy. Yes, I'm pissed. Yes, we're fixing it, but it might take a while, but we're working on it, kay? 2) Guys, we have a call center to replace the website. Why don't you all — half a million of you, BTW — phone in, instead? That'll (almost definitely) work!

Then, a woman behind him fainted. "This happens when I talk too long," joked the President. (See video below.)

President Obama kicked off the speech by introducing a satisfied Obamacare customer to the crowd, who declared that the Affordable Care Act's cut her medical bills and had saved her and her business from bankruptcy. Obama then defended the Act, using the same arguments that he's used to promote Obamacare since the beginning: that the biggest healthcare reform in a half-century would lift "the crushing burden of unaffordable healthcare," and make coverage both possible and cheap for millions of ordinary Americans. Obama then admitted that the website was absolutely "not working the way it should" (a staggering underestimation), and that he was rightfully infuriated by the buggy, slow, glitchy website.

"Nobody is madder than me that the website isn't working as well as it should, which means it's going to be fixed," continued the President. He then spent several minutes driving home the point that although the website might not be much of an option, the call centers were a viable alternative. Even though the ACA's exchange system was entirely marketed around the website. (Whoops...)

Frankly, Obama doesn't have the room to let potential customers get away, notes Michael Schere at Time:

While Obama could probably continue to tell Americans that the Obamacare rollout is little more than an iPhone app in need of an update, his health care law actually needs uninsured people to choose to sign up or it will fail. And so the spin can no longer stand.

Talking of things that can no longer stand...

During the midday Rose Garden speech, Obama wasn't above using the opportunity to make a serious dig at the GOP, calling the party's opposition to Obamacare "the only thing that unifies them these days." Certainly Republicans have been lauding the failure of the Obamacare exchange website, even calling on Health and Human Services Secretary Kathleen Sebelius to testify at a congressional hearing about the failure of the site.

The White House has gone back and forth about what's actually causing the glitches — at present, Obama said (optimistically) that an application should take between 25 and 45 minutes, and that's if it successfully goes through — stating alternately that it was and wasn't caused by too many visitors, and upgrading the word "glitches" to the vaguer "technical problems." And it's unclear whether officials didn't know, or just didn't disclose, the myriad of issues hand-in-hand with the launch of the exchange.

As Bustle reported Monday, the Republican-led House is calling for the resignation of Sebelius:

Some Republican legislators are even calling on Sebelius to leave her post. "I’m not a fan of those immediate calls for people to resign, but I think in this case, actions like the one you just outlined are going to make it harder and harder for her to do her job effectively," said Sen Marco Rubio (R., Fla.) Sunday. "I think people — the transparency or lack thereof on this issue is very concerning.”

To say that the first three weeks of sign-ups have gone less than smoothly would be an understatement. Both Obamacare critics and the media have jumped on the slew of glitches (including frozen webpages and problems relating to security questions) that have prevented people from actually enrolling in the health care plans.

“Let’s have congressional hearings, let’s find out who was responsible for this fiasco and then take the appropriate action," said Sen. John McCain, adding: "But this is just the beginning of the problems associated with a massive restructuring of one-fifth of our economy.”

As if things weren't bad enough, China is loudly laughing and pointing to the state of American government as a clear example of why the country should be de-throned and removed as a central banking power. It's certainly been a rough few weeks for Obama.