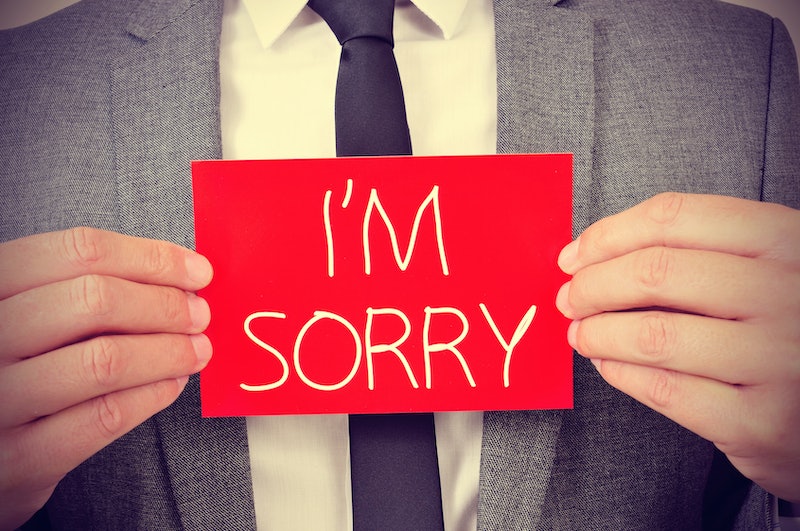 When it comes to apologizing, I've noticed a lot of the people I know fall into one of two camps: the people who never apologize because they're perfect and never do anything wrong, and the people who apologize for every single little thing, whether it was actually their fault or not. You might not have ever wondered why people differ in their approaches to saying "I'm sorry," but science is casting some light on it anyway, because new research says people with certain personality types are better at apologizing than others. For the record, I think I'm more of an over-apologizer; like if I drive my friends to a restaurant and we get caught in traffic on the way there, I'll apologize for choosing a congested route because it was totally my fault everybody happened to be on that road at the same time (and that Atlanta needs more left-turn lanes, but that's for another time).

But enough about me; let's get back to this study. Canadian and Australian researchers got together (in which physical location, we can only wonder) with 139 adults who were around their thirties. They gave participants a personality test, using the HEXACO model, which analyzes for honesty/humility, emotionality, extraversion, agreeableness, conscientiousness, and openness. They also gave the same personality test to participants' friends — remember how our friends know us better than we know ourselves? Then, participants answered a survey that rated how likely they were to apologize in certain situations.

The answers may not exactly surprise you: researchers found that people who scored higher on the honesty/humility and conscientious aspects were also more likely to report that they apologized frequently. Which, I mean, makes sense because if you're honest and humble you're probably not too proud to admit when you messed up, and thus have no problem apologizing for it. Researchers also had people self-report how prone they were to feeling shame and guilt, and found that people who felt guilty a lot were also more prone to apologize. Again, makes sense that people who feel guilt about something would then apologize for whatever they're feeling guilty about. Not sure if I'm super intuitive for reasoning out all these results, or if the findings are just really obvious. But either way, there you have it.

The study didn't specify how men and women ranked differently, which left me feeling kind of dissatisfied. I mean, we already know that women are more likely to apologize than men, and I know that wasn't the object of this study, but I would have liked to see if this new study supported that research or not. But either way, now I guess we know which friends are the easiest to make up with if we ever get into a fight. Which I can only assume is the real-life application of this study.