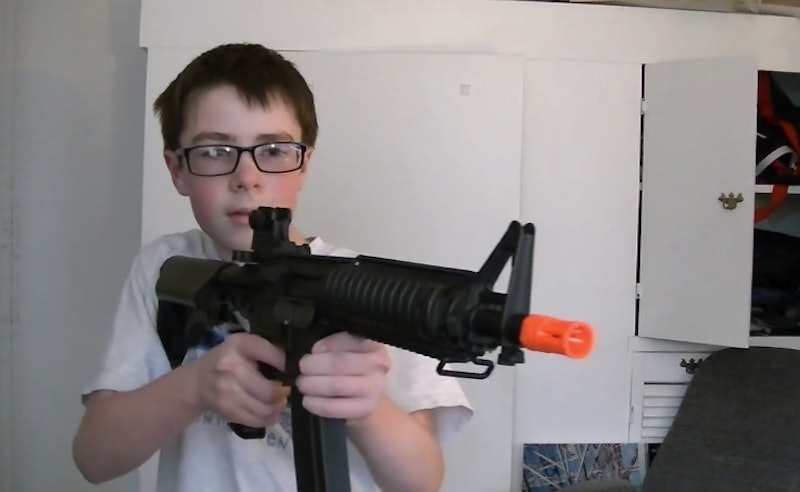 Here's your daily lesson: Do not shoot any kind of weapon at any kind of thing of value without first checking to see if it's loaded. You'd think most of us would know this already, but not so for this little nerd who shot an Airsoft gun at his computer screen, thinking it wasn't loaded, only to unceremoniously find out that it was. What a way to learn a lesson. It's also a testament to "nerd" no longer meaning "smart" and simply meaning "goober" (although I don't want to disparage this particular kid because he is super endearing and reminds me of my little brother so I just want to hug him and make him a sandwich).

Anyway, here's the backstory according to the kid himself:

"Yes, this is me in the video. The airsoft gun had been jammed for a few months, and I thought the battery was dead. The entire reason why I was recording this is because I wanted to try to do some special effects like Freddiew or Corridor Digital, so I recorded me pretending to shoot a gun so I could add the effects in. At the very end, my camera battery died. This happened over a year ago, and just now I decided to upload it."

It took this poor little kid A WHOLE YEAR to come to grips with what he did. His reaction is priceless, and his mom's reaction is pretty good too, especially because she's a mom who doesn't mind a good swear. Watch:

Here are 5 other nerds who totally failed at life:

1. This nerd who absolutely lost his whole mind as well as control of his limbs when his mom cancelled his World of Warcraft account

3. This nerd who doesn't know the words to Lady Gaga's "Poker Face"

4. This nerd who is a totally sore loser

5. This nerd who forgot his passport