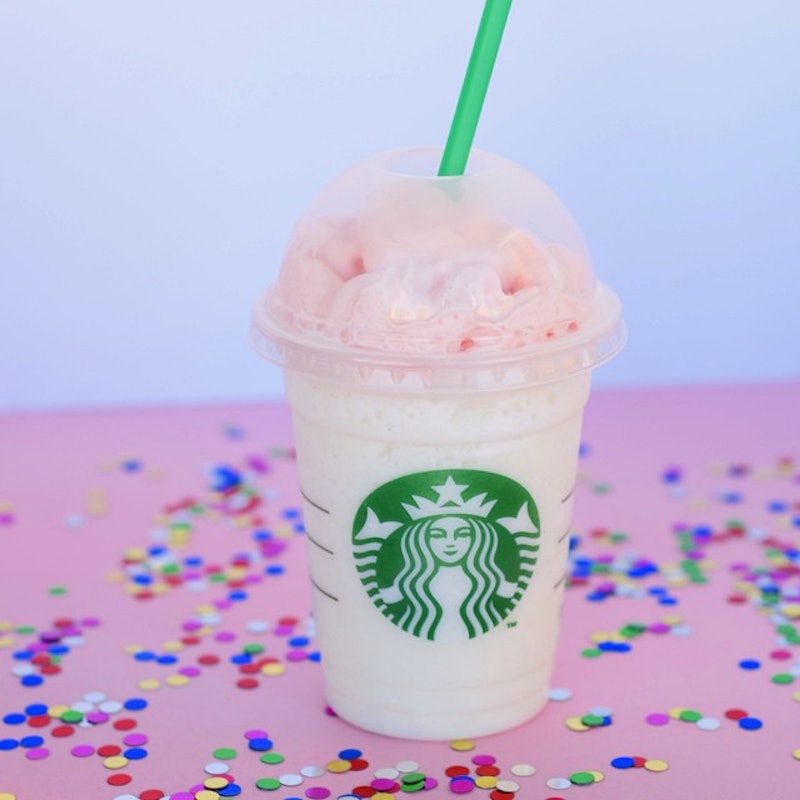 Bad news, everyone: Today is the last day you'll be able to indulge in a Starbucks Birthday Cake Frappuccino. To be fair, the Frappuccino's 20th birthday celebration has been going on for five days — which is four days longer than most of us usually take to mark a one-day-long occasion — but still. Whatever shall we do? Will we never again experience the joys of a blended beverage that tastes mysteriously like one of our favorite pastry confections? How will we live without it? The horror! The horror!

I jest, of course; obviously life will go on without the Birthday Cake Frappuccino being an official fixture of the Starbucks menu — and besides, ordering one after today is still as simple as asking your barista to blend you up a Vanilla Bean Crème Frappucino with a pump or two of hazelnut syrup thrown in for good measure. How do we know this? Because the drink made an appearance on StarbucksSecretMenu.net long before it ever became a birthday celebration offering. Come to think of it, that's not the only Frapp you can get that tastes like the most delectable of pastries; if you're mourning the loss of the official Birthday Cake Frappuccino, why not order one of these Starbucks Secret Menu Frappuccinos that taste exactly like baked goods instead?

I love cinnamon rolls, but I can't usually be asked to go through all the trouble of making them. It's a good thing I can get a drink that tastes just like one by adding white mocha syrup and cinnamon dolce syrup to a Vanilla Bean Frappuccino, isn't it?

More of a fruity dessert kind of person? Go for this delicious-sounding, cobbler-inspired pick instead. All you need to do is add white mocha syrup, raspberry syrup, some freeze-dried blackberries, and some blueberries to a Vanilla Bean Frappuccino. Yum!

Who says you need to actually bake your pastries before enjoying them? Not me! (As long as they're egg-free and safe to consume raw, that is). A Cinnamon Dolce Crème Frappuccino with mocha syrup and java chips blended in and topped with cookie crumbles and chocolate whipped cream is just the indulgence to satisfy the cookie dough fans out there.

Lovers of this layered Italian dessert can get their caffeine fix at the same time by adding hazelnut, toffee nut, caramel flan, and mocha syrups to a Coffee Frappuccino. An espresso shot, caramel whipped cream, caramel flan sauce, and mocha drizzle finish it off. Talk about decadent!

This one involves a little bit of fancy layering, but it's totally worth it in the end. First, add strawberry juice up to the first line and milk to the second; then mix a crème base, vanilla bean powder, white mocha syrup, toffee nut syrup, and whipped cream to the blender and mix it all up. Voila! Instant shortcake.

Sansa Stark would love this one, wouldn't she? First, add half lemonade and half whole milk to the first line. Then blend together vanilla bean powder, a crème base, white mocha syrup, and an actual Lemon Cake Pop (don't forget to remove the stick first!). Pour it into your cup and enjoy.

Feeling patriotic? Just happen to have a fondness for pie? Either works! For this one, fill to the first line with a crème base and to the second with apple juice. Then add some cinnamon dolce syrup and some caramel syrup and blend it all up. It's like pie a la mode in a cup.

I find it somewhat interesting that toffee nut syrup appears to be a key ingredient in cake-flavored Frappuccinos. I wonder exactly what it is about it that makes us think “OMG, CAKE!” whenever we taste it? Food (haha) for thought. Anyhoo, a Coffee Frappuccino with cinnamon dolce syrup, toffee nut syrup, and some optional vanilla syrup will give you the perfect frozen equivalent of a delicious, fluffy slice of coffee cake. Yes please!

Not a berry cobbler kind of person? Maybe this peach variety will suit you better. Start with a Vanilla Bean Frappuccino and blend in peach syrup, vanilla syrup, and whipped cream. If you're feeling extra decadent, you can top the whole thing off with more whipped cream and a bit of cinnamon dolce topping.

For the citrus lovers, here's a twist on a cool and classic dessert. Weirdly, it doesn't seem to involve a Frapp base at all; as such, you might want to ask your barista to toss in some ice along with everything else. In any event, though, adding Cool Lime juice to the first line, whole milk to the second, whipped cream, and a few pumps of white mocha, vanilla, and cinnamon dolce syrups will give you a beverage that tastes just like the filling of a key lime pie. Delish!

New to the world of custom drinks? This one is hard to mess up; all you need to order is a White Chocolate Mocha Frappuccino with a pump or two of raspberry syrup thrown in. You might add some cheese syrup, too, if that's a thing where you are (although I'm still not totally convinced it's real. I mean, why call it “cheese syrup?” Why not the infinitely more appealing “mascarpone syrup” instead? I guess we'll never know.)

It's Girl Scout Cookie season year round with this minty drink! Start with a Green Tea Crème Frappuccino for your base; then add in java chips, mocha syrup, and peppermint syrup. If Thin Mints aren't your thing, a) who are you? (just kidding — Thin Mint non-lovers might sound mythical, but I'm sure they exist), and b) you might try a Samoa Cookie Frappuccino or a Lemonades Cookie Frappuccino instead.

Who needs birthday cake when you've got Black Forest cake? Mimic this classic dessert by blending up a Mocha Cookie Crumble Frapp with raspberry syrup swapped in for the standard vanilla syrup. Pro tip: Call it a "gateau" if you want to sound super fancy.

If your favorite part about the winter holidays — regardless as to which ones you actually celebrate — are Christmas cookies, here's a drink that will bring some holiday cheer to your day year round: Add peppermint and toffee nut syrups to a crème base Frappuccino and top with whipped cream, a caramel drizzle, and a sprinkle of raw sugar.