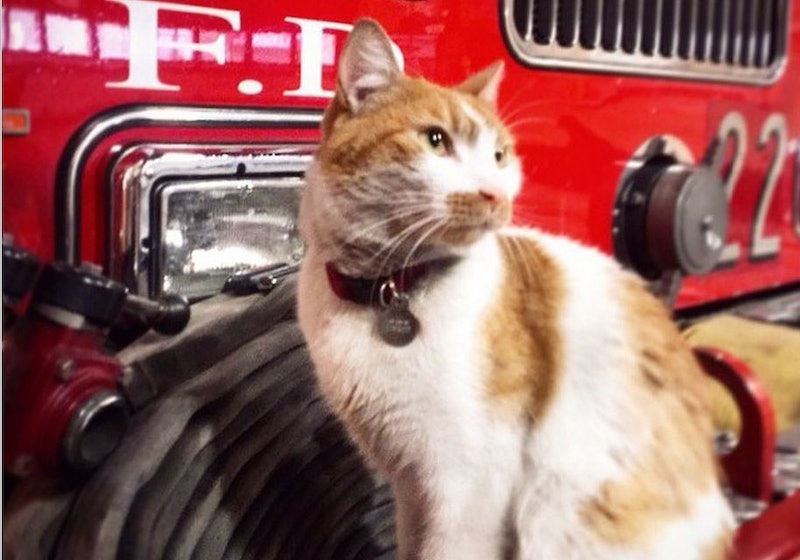 When most people think of firehouse pets, they think of Dalmatians... but who says dogs are the only furry creatures suited to life at the fire department? Not the #FirehouseCats of the New York Fire Department — and they've got the Instagram accounts to prove it. @Carlow_FDNY_Cat and @MidtownBoogieFDNY have taken Instagram by storm — and it's easy to see why. The Internet loves cats, particularly when they're rescues, living in unusual locations, or constantly doing hilarious things. Carlow and Boogie tick all of the boxes, so of course they're everyone's new favorite Instagram celebrities. Including mine, because you guys? They are the best.

Carlow has been Instagramming his adventures for a little over a year; Boogie, however, is a little more recent, with his first shots dating back to November of 2014. Both of them are rescues, with Carlow making his home at Ladder 13 in the east 80s and Boogie on 31st St at Ladder 24. We know a little less about Boogie's history; Carlow, however, has been around for a while: According to a comment on one of Carlow's earliest photos, he was rescued by firefighters from Ladder 13's Engine 22 when he was just a kitten. “They found me in a tire in a mechanic shop and gave me a nice place to live,” the feline wrote (or “wrote,” if you prefer, since obviously someone else is doing the writing for him — but I prefer to think of him sitting there at the keyboard himself, because the mental image is priceless). Scarily, Carlow went missing briefly in 2012 after getting spooked and running out the door; he was later found and returned to his home at Ladder 13 after a citywide search, though.

And it's a good thing, too, because from both Carlow's and Boogie's Instagram accounts, it's pretty clear who's really running the show at the FDNY. After all, someone's got to check the tires:

Make sure the sirens are working:

And get the water pitchers ready:

As well as adjust the mirrors:

And guard the Snapple:

The FDNY itself is keeping mum about their tiny army of firehouse cats; according to DNAInfo, firefighters from Ladder 24 won't go on record about Boogie without permission from their superiors, while Ladder 13 didn't respond to requests for comment. Furthermore, FDNY spokesman Frank Dwyer told the website that he didn't know “what a rescue cat is.”

Even so, though, it looks like firehouse cats are here to stay: There's a whole hashtag on Instagram dedicated to them, with a few others joining Carlow and Boogie from other locations:

Head on over to @Carlow_FDNY_Cat and @MidtownBoogieFDNY for more of these two fabulous felines — and don't forget to check out the #firehousecat hashtag while you're at it.