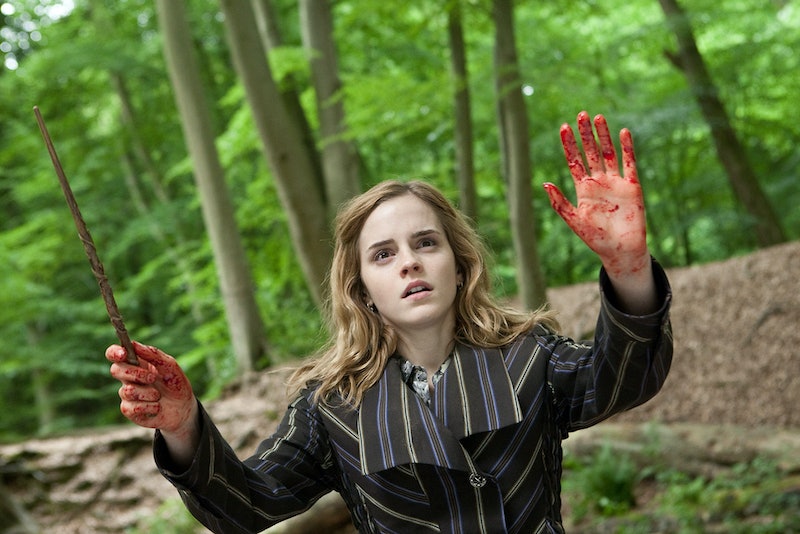 Though we'd like to think that, as a culture, we've become enlightened about periods, the fact that Instagram banned a photo of a woman with menstrual blood on her pants last week means that there are still some people out there who think menstruation is dirty, offensive, or otherwise icky. But don't feel down about it; based on the volume of both criticism of Instagram's censorship tactics and praise for Rupi Kaur’s period blood photo — both of which were so intense that Instagram restored the photo — the people who still think periods are gross are probably in the minority. And if they're not, they should be: because there's nothing inappropriate about a bodily fluid that women have to deal with each month for a huge chunk of their lives. And because periods are actually, well, pretty awesome.

Women bleed. It’s just our thing. Even if we’re on birth control that controls our fertility, most of our bodies still to go through menstrual cycles, including bleeding from three to seven days each month. Cramps, headaches, and other menstrual problems may make us hate our periods sometimes — but if you focus on the actual mechanics of how we menstruate, you can see that periods are fascinating, even if they're inconvenient. Even as a woman who doesn't want to have kids of my own, I think the fact that my body’s menstrual cycle can create another human being is, for lack of a better word, cool.

In fact, lots of things about periods are pretty amazing. And once we start learning about how complex, unique, and beautiful our periods are, we can fight back against the negative responses that mentioning menstruation can still provoke. So if anyone tries to tell you that your period is gross or pointless — or doesn't belong on social media — hit them with some of the six facts below that prove your period is basically as badass as Hermione Granger.

In 1971, University of Chicago psychologist Martha McClintock pioneered research on the theory of menstruation synchronicity — the idea that a group of women's periods will sync up if they live in close quarters with each other. After observing an all-female dorm of 135 women for about six months, McClintock found that the women’s menstrual cycles began synching up, with more of the women menstruating at the same than they had six months before. This was enough to make the idea of women's menstrual cycles impacting each other become common knowledge.

Twenty years later, however, new research examined a larger group of women for a longer duration of time, and found that period synching is a myth; every woman has her own unique cycle which is not impacted by the cycles of the women around her, because much like Hermione, periods just do their own thing.

2. It Can't Help The Fact That It's A Little Magic

Well, periods almost do their own thing — although some scientists scoff at the idea, there is some evidence that the moon plays a role in establishing menstrual cycles. A 1980 study of over 300 women, published in the American Journal of Obstetrics & Gynecology, found that 40 percent of women studied menstruated within two weeks of the full moon.

In 2011, a study published in Acta Obstetricia et Gynecologica Scandinavica tracked the cycles of 826 women, and found that 30 percent of women menstruated during the full moon. While both of these figures are still in the minority of each study (because not everyone's body sticks to an exact 28 day menstrual cycle), there is still something very interesting about the idea of the moon exerting a pull on something besides the tides.

3. It Has Some Surprsingly Seductive Powers

Women feel increased sexual energy during their period. The possibility of pregnancy is reduced (but not eliminated) during menstruation, and this may free women to feel more sexual during this time. Also, there is more pelvic congestion during a woman's periods, so she is already experiencing this heaviness, which may trigger or translate to arousal… Finally, orgasm is a known reliever of pelvic congestion and cramps.

4. It Needs Calm To Work Its Magic

Although there are many reasons why a period can be late or just straight-up unpredictable, your stress levels might be what's causing your erratic crimson tide.

Stress is the number one reason why your menstrual cycle can become irregular — when you're freaked out, your body's production of the stress hormone cortisol goes into maximum overdrive. This can do more than make you a hot mess of emotions; it can throw your period totally out of whack in the process. This is because cortisol impacts how much of the hormones estrogen and progesterone are produced by your body; too much cortisol in your body, and you might be looking at some uneven hormone production — and, thus, a delayed period.

5. It Has The Power To Help You Read People

Much like Hermione helping Harry become a good enough wizard to perform the Legilimency Spell, you period might help you read people's minds. Or as Bustle's Emma Kaywin explains,

There’s some preliminary evidence that you are at your most empathetic and able to connect with others around days five or six of your cycle, due to lower levels of the hormone progesterone.

6. It Can Be A Clever Trickster

While your vagina is still a badass on many levels, it's also a bit of a liar: during your monthly menstruation, your body loses only one to two ounces of actual blood. That's a quarter cup or less! The rest of it of what ends up on your pad or tampon is just your usual vaginal discharge and a layer of uterine lining.

And because that level of deceit isn't quite enough: you can still still get your period during the early stages of pregnancy. Terrifying, I know. But wizards are sneaky like that.

More like this
The 19 Best Tweets & Memes About Bisexual Awareness Week
By Lexi Inks
Why A Libra & Libra Couple Might Become Codependent
By Kristine Fellizar
These 4 Signs Are The Seductive Sirens Of The Zodiac
By Brittany Beringer
Breeding Kinks Have Been On The Rise Since Roe V. Wade Got Overturned
By Lexi Inks
Get Even More From Bustle — Sign Up For The Newsletter