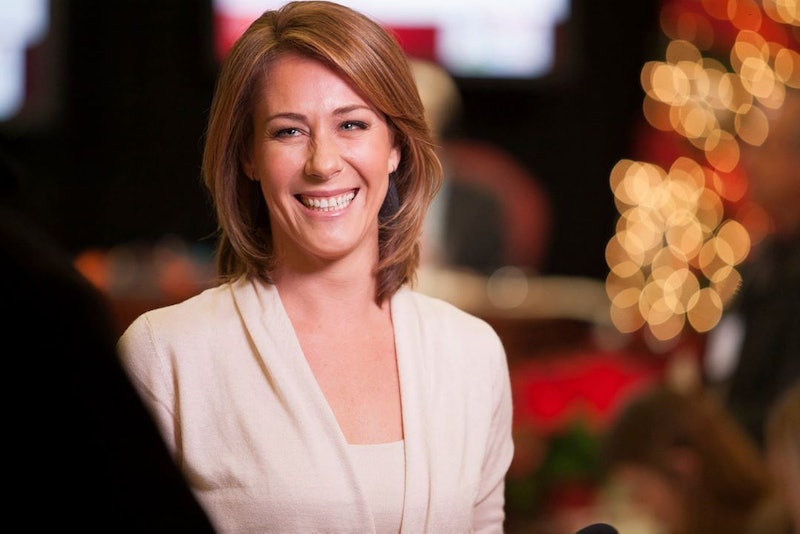 We're all aware that bodies get bigger when they're pregnant, right? I mean, when you have another human growing inside you, of course you're not going to look the same way you do when you don't — and of course your clothes are going to fit you differently, no matter how rockin' your maternity style is. So why are people sending pregnant Canadian meteorologist Kristi Gordon body-shaming hate mail? I cannot fathom it — but at least she and her colleagues, co-anchors Robin Stickley and Squire Barnes, are striking back.

Gordon, who is Senior Meteorologist on Global BC's News Hour, Early News, and Noon News, recently took a few moments of a News Hour Plus segment to read some of the hate mail viewers have sent her during her pregnancy. Joined by Stickley and Barnes, all three of them made an important point not only about body positivity, image, and acceptance, but about bullying, as well. I applaud all three of them for their response, as well as Global News for supporting the segment. Because seriously, you guys — this kind of thing? Not OK. Never OK. And if we don't call out this kind of behavior and the people perpetrating it as we see it, it'll keep happening.

Here's a brief selection of the kinds of things people have been writing to Gordon, along with her colleagues' priceless reactions. Bear in mind, too, as Stickley pointed out, that the senders of these letters pretty much never sign them or list their return address, which makes them not only awful people, but cowards as well. Ready for this? Here we go:

1. “Nowhere on North America TV have we seen a weather reader so gross as you.”

That's a “what?!” face from Barnes if I've ever seen one.

Gordon omitted the word “shit” for broadcasting reasons, but again, Barnes and Stickley's faces say it all.

3. “Buy some decent clothes and have more respect for your unborn child.”

Some champion side-eye from Stickley there.

I like to think that internally, Stickley is yelling, “OH NO YOU DIDN'T!”

That's the universal gesture for “I can't. I just can't.”

Not only that, but the story gets worse: Gordon noted in the segment that she was actually expecting this kind of response. Why? Because it wasn't the first time it had happened. This, you see, will be Gordon's second child; when she was pregnant with her first, she experienced the exact shame body shaming.

Writing for the Huffington Post, Gordon described what happened the first time round. When she began to show, she started receiving emails, tweets, and other missives criticizing her wardrobe choices: For some reason, complete strangers felt the need to tell her to “cover up,” “be more professional,” “not wear horizontal stripes,” and how irresponsible she was being for wearing high heeled shoes. To be clear, Gordon wasn't revealing any skin; nor were her outfits in any way unacceptable for her job. And yet scads and scads of people felt not only that her pregnant body was unseemly purely for being pregnant, but also that they were perfectly within their rights to vent their spleen on her about it.

So this time, Gordon grabbed the proverbial bull by the horns right from the get-go. In the News Hour Plus segment in which she revealed her second pregnancy, she stated along with her announcement, “I would like people not to get upset with me about what I wear during my pregnancy.” As she put it, “It's not easy to find work clothes when your belly is out to there” — and not only that, but let's face it: As Gordon demonstrates in this lovely still image from the video, the outfit does not exist that can hide a pregnancy:

Nor should it, because pregnant bodies are not something to be ashamed of or hidden away.

At first, the reactions to her pregnancy were generally pretty positive. “I was beginning to think maybe the message had gotten through, or maybe society had changed somewhat and people were more accepting of pregnant bodies,” she wrote on HuffPo. But soon, she found out, society hadn't changed; “it was simply that I wasn't big enough yet,” she wrote. “As soon as my belly got bigger, the emails started coming in.”

And that's where the News Hour Plus hate mail showcase comes in. Gordon laughed off all the letters and emails until she got the one with the “brick shit house” comment. As Gordon said in it, she didn't think the comment had affected her; as she put it, “I have to say that I feel like I'm a pretty confident person; I wouldn't be in this industry if I wasn't.” But later on that night, she said, she realized that it had actually made an impact — and not a good one. “Last night, I went to bed and I thought about some of the things that I did yesterday in the evening,” she said. “ I checked myself out in the mirror a couple of times, just to see how big I'm getting. I asked my husband, 'Am I not seeing it? Am I getting really big?'… It wasn't until I went to bed that I realized, despite me thinking that these guys are crazy, or me having all these rational thoughts about it — it's amazing how when you say something mean about someone, it still affects them.”

And the kicker is this: Although Gordon, Stickley, and Barnes hope that by drawing attention to these letters, maybe they'll inspire the people who sent them to think twice before they do something like ti again… they know that it probably won't. They know that it will probably just give them the satisfaction of knowing they hit someone where it hurts. As the kids these days might say, smh.

But that doesn't mean that this segment is meaningless. The lesson it teaches the rest of us is twofold: First, pregnant bodies are to be celebrated, not shamed; after all, they're indicative of a brand new life being brought into the world, and that? Is pretty amazing. And second: Don't be like the people who wrote those letters. There is no good reason — not one — to treat someone that poorly, whether you know them in real life or whether they're just someone you see on your TV. No matter what you call it, it's bullying, plain and simple. And you know what? You're better than that. We're better than that. We have to be better than that.

Oh, and as Barnes said, there's also this: If you're going to diss someone, at least learn how to spell first. “Global” is spelled G-L-O-B-A-L, not G-L-O-B-E-L. Just sayin'.

Head on over here to watch the video.

More like this
Berriez Founder Emma Zack On Her Size Inclusive NYFW Show
By Dominique Norman
Black Women's Equal Pay Day Highlights An Upsetting Problem
By Brandi Neal
Women Around The World Are Cutting Their Hair In Solidarity With Mahsa Amini
By Darshita Goyal
Help! I'm Not Getting Any Attention On Dating Apps. What Can I Do?
By Sophia Benoit
Get Even More From Bustle — Sign Up For The Newsletter