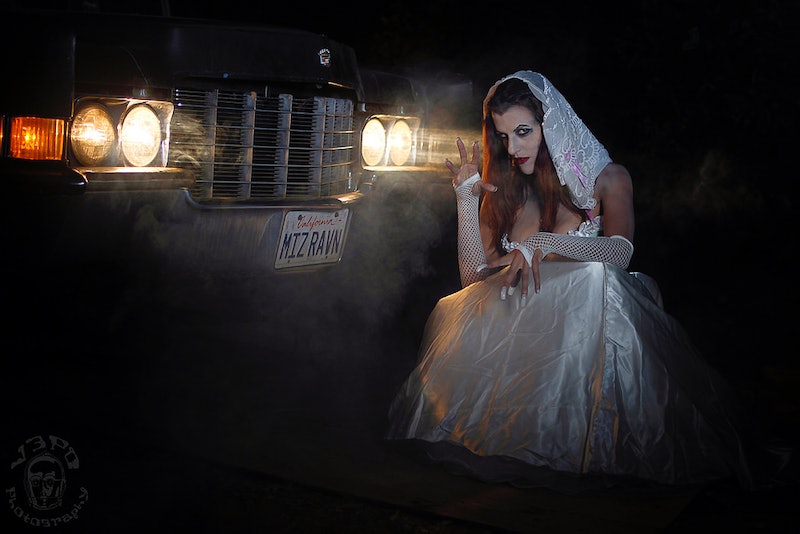 There comes a time every spring when we all begin doing one seemingly innocuous activity: Checking our mail. But why? Why should unlocking the little metal boxes which hold our most treasured correspondences suddenly become a thing of such terror? For one reason, and one reason alone: It's almost wedding season. But hey, at least we're not alone in our dread; BuzzFeed's fake movie trailer, “Wedding Season Is Coming,” depicts wedding season as the horror movie we all know it really is. If we're going to fight through it, we may as well fight through it in solidarity. There's safety in numbers, right?

OK, yes, maybe I'm being a little unfair to wedding season; but given the insane number of weddings that usually happen between the months of June and October each year, the feeling of horror is at least a tiny bit warranted. First off, it's not only monstrously expensive to plan a wedding, it's also horrifically pricy just to go to one: As of last spring, the average cost of attending a wedding as a guest was almost $600. Add to that the fact that practically everyone plans their weddings for June, July, August, September, and October means that each year, you'll probably be shelling out $600 several times over — because odds are you'll have more than one to go to. Oh, and let's not forget about the fact that all those weddings usually require taking time off work, so say goodbye to all your vacation time, too. See? Wedding season is the worst. I mean, yes, congrats to all those happy couples — but it's still the worst.

In that respect, BuzzFeed's video is spot on. You might think it's BS… until it happens to you:

Should you find a pale, creamy, unnecessarily tiny and cute envelope waiting for you in your mailbox or on your door step — run. Run for your life. Because it can only mean one thing:

No one is safe!

Are we going to have to do the Macarena at the reception?

IT'S MADNESS, I TELL YOU. MADNESS.

How long before it's you?

Again, I mostly kid — but let this hilarious video serve as a valuable reminder, as well: You control wedding season. Wedding season does not control you. With great power comes great responsibility, right?

More like this
Androgynous Formal Wear That Will Make You Feel *So* Fancy
By Megan Lasher
26 Ghost Story Podcasts To Get You Ready For Halloween
By Jessica Booth, Mia Mercado, JR Thorpe and Emma Carey
15 Easy Pranks To Play This Halloween
By Emily Kelley and Lauren Grant
10 Stranger Things-Inspired Halloween Costumes For True Fans
By Emma Carey
Get Even More From Bustle — Sign Up For The Newsletter