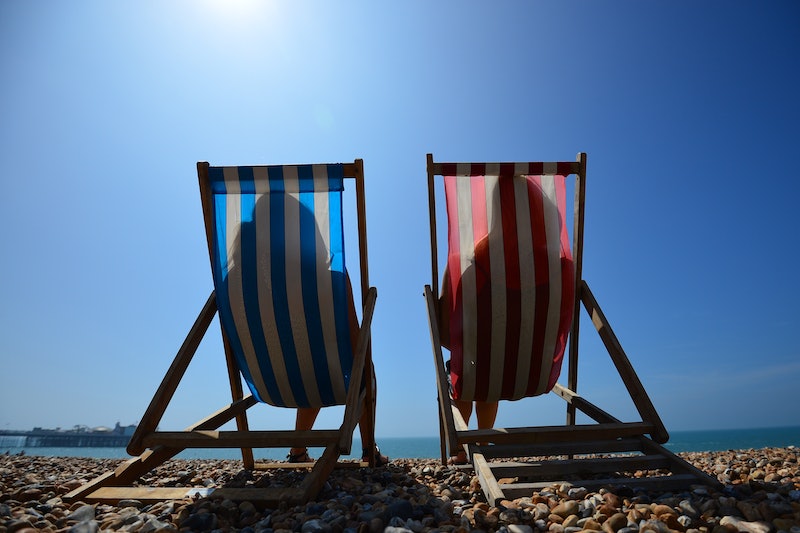 Remember John Whitbread, the guy whose fiance broke off their engagement a few weeks before the wedding, leaving him with non-refundable reservations for their honeymoon trip, so he decided to auction his extra honeymoon ticket off on eBay? Well, it just so happens Whitbread went on his Dominican Republic honeymoon with a total stranger, and they just got back from the adventure of a lifetime. Just in case you were doubting whether or not this story was true and if John would actually go through with it. It turns out you actually can trust what you read on the Internet, at least sometimes. What a relief.

Whitbread told The Daily Mail that when the two highest bidders on the eBay auction failed to pay up, he decided to just raffle off the tickets for Balls to Cancer, a testicular cancer charity organization, and give the rest of the money to charity (how great is he?). The extremely lucky winner, 36-year-old Kelly Wood, won the raffle and scored the tickets for only £10 (the price of a raffle ticket). Talk about the bargain of a lifetime. I may or may not be sitting here, stewing in jealousy as we speak. But I'm so happy for you, Kelly. Just thrilled for you.

Kelly and John met at the airport for the first time, so I can only imagine how nervous they were feeling — dealing with making your flight is stressful enough as it is! But it's all good because it looks like the two had a blast. Kelly wrote on Facebook that she and John were "having a fantastic time and getting on like a house on fire as they say!"

I know what you're secretly hoping to yourself, because I'm hoping it too: did John and Kelly fall in love, and are they going to get engaged anytime soon and go on a real honeymoon? Sadly, no. John said: "Everyone is hoping I've found romance again. Obviously not. I only recently split up with my girlfriend."

In other words, real life is not a Nicholas Sparks book — but this story would make a great plot for a movie. John, I'll be in touch.

But there is a happy ending to this story: even though John and Kelly won't be headed to the altar anytime soon, the two reported that they have become great friends. John said, "I have made a friend out of it and it's brilliant. It could have easily gone the other way. To go on holiday with a complete stranger and get on is incredible." I have to agree, it's hard enough travelling with people you actually know. To go on a vacation with a complete stranger and not want to kill them by the end of it is nothing short of miraculous.

And as for John's ex-fiancee? While she's finding the breakup hard, she says there are no hard feelings about his choice to go on the honeymoon with someone else. "Fair play to John," she said. "I'm pleased he's doing something positive." So it looks like there was a silver lining to the breakup after all. If this story isn't the ultimate "how to make lemonade out of lemons," then I don't know what is. I'm happy for everyone involved. Group hug.