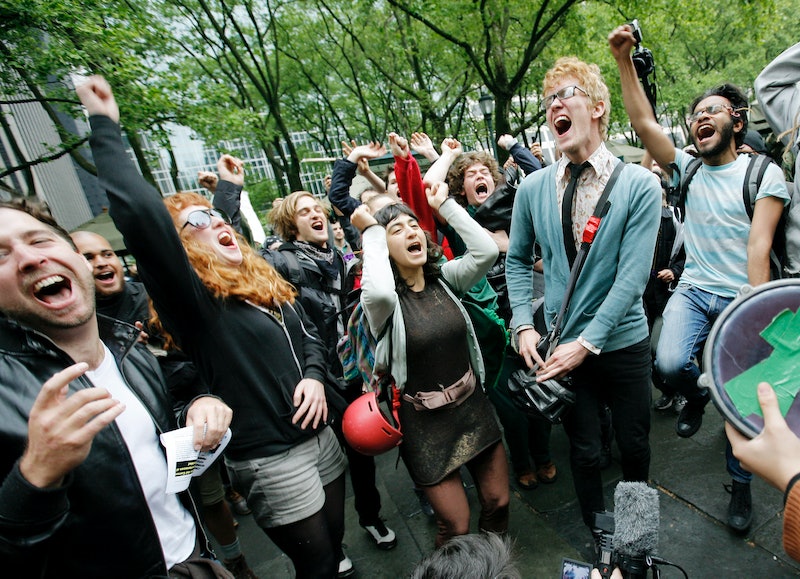 While Millennials often get a bad rap for being narcissistic oversharers, one thing is very certain about them: They’re on the right side of history when it comes to accepting and supporting gay marriage. A new poll by the Public Religion Research Institute has found that when it comes down to morals, Millennials support same-sex marriage more than casual sex between two consenting adults. Basically, while their hearts are open to love in all its forms, the Millennials, aged 18 to 34, surveyed in this poll (please note is was conducted a religious institute) are fairly prudish when it comes the glory of the one-night stand.

When exact numbers were boiled down, 38 percent of those polled felt that homosexuality was wrong, 42 percent thought it was completely acceptable, 7 percent refused to answer, and 13 percent said it depended on the situation. I’m not really sure how that makes any sense, because in what world is being gay okay sometimes but bad other times? I’ll try not to dwell on that bizarre thinking.

But while that 42 percent think that same-sex marriage is great (because it is!), 37 percent thought that sex without the intention of making it a legit relationship is bad news bears. I’m sorry ... come again? Like, what the hell year is this? The study also found that homosexual behavior is far more acceptable than having an abortion (only 21 percent thought that was morally acceptable) and sex between teenagers (24 percent.)

What confuses me here is that 40 percent of Millennials think it’s totally cool to have a baby out of wedlock, which means they’re accept a woman’s right to choose to keep her baby, but with only 21 percent thinking abortion is morally acceptable, it’s clearly a contradiction of sorts. If 40 percent can accept that it’s a woman right to choose to keep her baby, then one would think that at least that amount of people would feel the same way in supporting a woman’s choice to terminate her baby. But I digress.

In my humble (and liberal) opinion, I do find it refreshing that gay marriage is as morally acceptable as it is, but I also think that if you’re going to exist under the theory of live and let leave, there shouldn’t be such a difference in these percentages. If you support gay marriage and homosexual behavior, the what’s so wrong with supporting someone’s desire to give into their sexual needs and have a one-night stand? Or, if they want, abort an unwanted pregnancy?

These numbers still need some work, and although gay marriage is finally getting the acceptance it deserves, to be honest, 40 percent still isn’t enough. We need to get those percentages into the majority. So come on, Millennials, get on that.

More like this
The 19 Best Tweets & Memes About Bisexual Awareness Week
By Lexi Inks
Wanna Try Hinge's New Video Prompt Feature? Here Are 7 Tips
By Lexi Inks
6 Dating App Tips To Try If You're Looking For A Serious Relationship
By Lexi Inks
Breeding Kinks Have Been On The Rise Since Roe V. Wade Got Overturned
By Lexi Inks
Get Even More From Bustle — Sign Up For The Newsletter