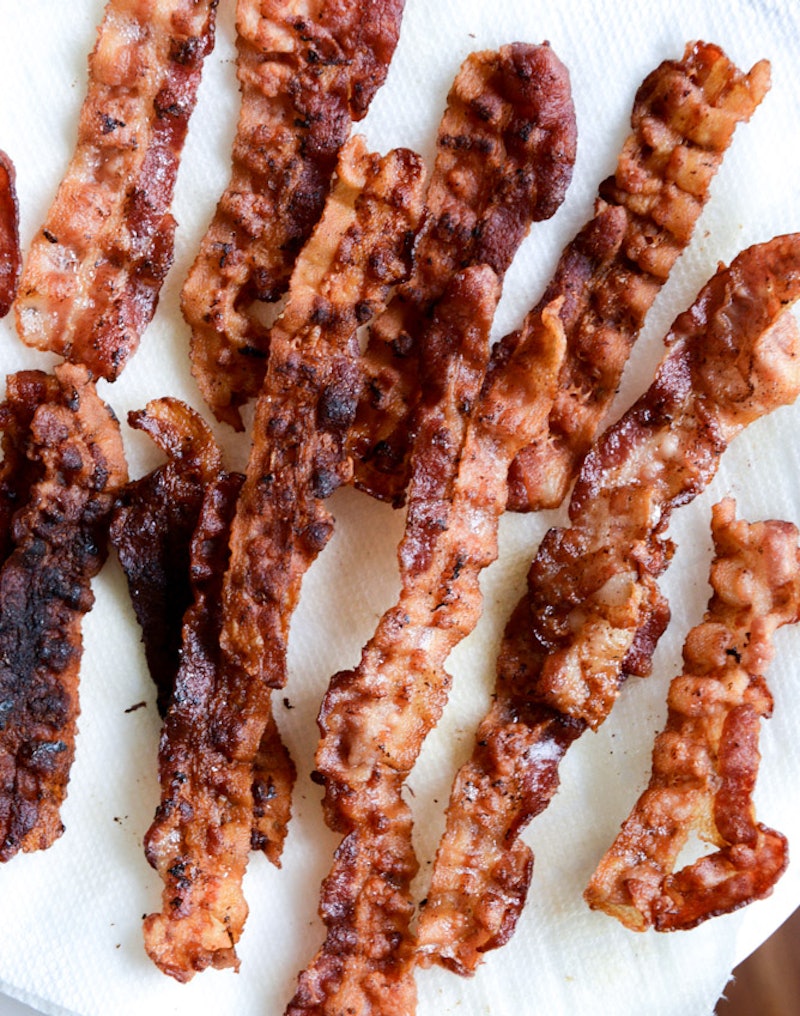 We know that sound and taste are both two of our commonly-cited five senses — but do they overlap at all? By which I mean, can sound actually be a flavor? Weirdly enough, the answer is: Yes. Or at least, kind of. According to a recent literature review by Charles Spence of Cambridge University, what your food sounds like might actually make it taste better. It sounds weird, but the research supports it — so prick up your ears. It might open up your palate while you're at it.

Spence's study is pretty exhaustive, so if you want to read the whole thing, head on over here to do it. If, however, you're pressed for time, the short version is this: Sound has a profound effect on how we perceive what we eat. We like crispy foods better when they're noisier, and we like softer foods better when they're quieter. Want to know more? Here are just a few of the studies Spence looks at in his review and what we can take from them.

The chocolate-covered Magnum ice cream bar first appeared in stores in 1989. Some years later, researchers working for Unilever asked Magnum customers what they would change about the bar if they could to make it better. One of the biggest complaints? The chocolate coating was so crispy that it often chattered upon being bitten into, scattering pieces on the floor or — worse — on the people eating it. So they briefly reformulated the bar with a softer chocolate shell that would snap in quite the same way… only to find that consumers didn't like that one, either. They missed the crackling noise the original bar made when you bit into it. Accordingly, they went back to the old formula shortly thereafter. Ah, market research!

The Difference Between Crispy and Crunchy

This study reminds us that it's not just enough for the food to make noise in the first place; the type of noise it makes also matters. In this case, researchers discovered that foods that are “associated with higher-pitched biting sounds” — things like lettuce and chips — are what we mean when we call something “crispy”; “crunchy,” meanwhile, is reserved for foods like granola bars, croutons, and almonds — items with lower frequency noises. I don't know about you, but I'd be interested to see how much whether our cravings for a specific food are sated by other foods that produce noises at the same frequency.

A Matter of Freshness

Let's take a look at some of Spence's own work, shall we? Research he conducted in 2005 with Massimiliano Zampini explored the role of sound in how we evaluate the freshness of food. In this experiment, participants were given a whole bunch of potato chips and asked to rate them on their “freshness” or “crispness” — but they didn't just bite into the chips. They bit into them and received the sounds associated with the action through closed-ear headphones, which allowed the researchers to manipulate what they heard. When the overall sound levels were increased and/or when the high-frequency sounds were given a bit of a boost, the participants evaluated the chips as fresher — even though they all came from the same package.

The Fickleness of Perception

What we hear can even influence how we perceive the texture of our food. In a Japanese experiment, researchers pre-recorded the sounds of people chewing crunchy rice crackers and sticky dumplings; then they played the sounds back while participants ate something else: Fish cakes, gummy candy, marshmallows, pickled radish, and a variety of other foods. Whenever the rice cracker noise was played, participants rated the foods they were eating as harder and dryer; similarly, whenever the dumpling noise was played, participants rated the foods as softer and more moist.

Again, these are just a few of the studies Spence included in his review; they're all equally fascinating, though, so if you're as into this kind of stuff as I am, read the whole thing for free here. The bottom line is that it's not so weird to think of sound as a flavor — so why not chow down on a few of the snacks below? They all make incredibly satisfying noises, so they're sure to hit the spot. One caveat, though: As always, moderation is key. Some of the things included in this list are quite healthy, while others… aren't. Indulge in them as a treat every now and again, but don't overdo it, mmmkay?

Soggy toast is no good. Crisp, fresh toast, however? Is divine. Take your pick of toppings; a little bit of nut butter is always a good bet if you need a dose of protein.

Or baby carrots. Either will crunch delightfully when you bite down on them.

Duh. And hey, now we know why we prefer crispy bacon to limp, sad bacon.

If you're not really a “bite down on a whole apple” kind of person, apple slices might b

Milk is a requirement in this case. How else are you going to make them snap, crackle, and pop?

A Crunch bar would probably also do the trick.

Just make sure they're fresh. Old peppers get kind of mushy.

Ditto for the cucumbers — freshness for all produce is key if you want to relish the noises they make as much as the taste and mouthfeel of them.

I find fresh green grapes to be the most deliciously poppable, but maybe that's just me.