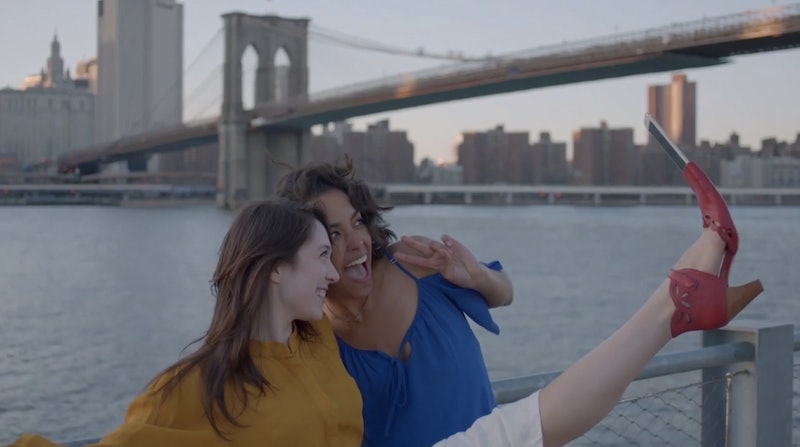 I'll admit it; I bought a selfie stick, and I'm ready for the next level commitment: selfie SHOES. When deciding to purchase the aforementioned stick, part of me was motivated by plain and simple curiosity (what was this selfie stick everyone was obsessed with?!), and the other side of me simply wanted to be able to fit more people in a photo. So when I heard via a press release that Miz Mooz was coming out with something called the Selfie Shoe, my ears perked up for similar reasons. So what is the Selfie Shoe, you ask. Well, think of it like a selfie stick, except your shoe is the phone holder... and your leg is the actual stick. Yeah, you kind of have to see the video to get what I mean. Given that selfie sticks have been banned everywhere from the Louvre to Coachella, an alternative option was bound to happen, right? But have we as a society really sunk this low? Well, sort of.

It's a JOKE, people. Of course it is. Granted, most people probably thought the original selfie stick was a joke before, you know, the whole world became obsessed with it, but this is even more ridiculous than that ever was. If you don't believe that's possible, then you really have to see the video. Well, OK; it's true that the whole thing is being played off as for real, so maybe I'm the one missing something here, but the shoes are set to go on sale on April 2. The day after April Fool's Day. So... I have my suspicions.

Either way. Miz Mooz' video for the Selfie Shoe makes you cringe at all of your selfie-ing habits (you know you bought a selfie stick at one point, too) and laugh a whole lot, and all in all, I think that's a very good thing. Maybe the ridiculous thing here isn't the joke itself, but the fact that for a second I actually thought to myself, "Well, I don't know. This could probably be a thing." Yes, we've gotten to that point, everyone. Or maybe it's just me.

More like this
TikTok's "Would I Look Good With Short Hair?" Hack Is Genius
By Olivia Rose Ferreiro
17 Cozy-Smelling Fall Candles For 2022
By Olivia Rose Ferreiro
13 Vampy Nail Ideas Perfect For A Moody Manicure
By Jordan Murray
Hailey Bieber’s Moody Black Mani & Vampy Lips Are Peak Fall Vibes
By Audrey Noble
Get Even More From Bustle — Sign Up For The Newsletter