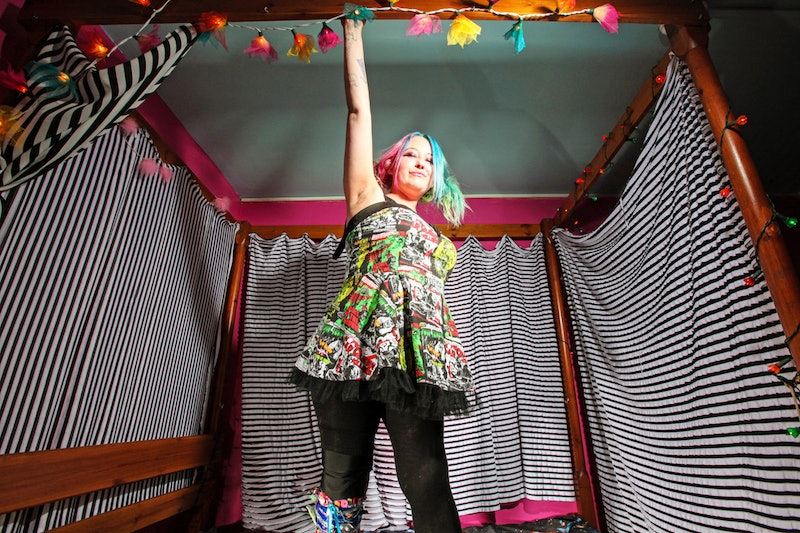 The first time I encountered the poet Jackie Hagan, she was a flurry of rainbow hair and glitter in the background of a beautiful historic building in Manchester, England. I complimented her look and she gave me a flyer — a black and white photocopied scrap, pasted to a rectangle of iridescent, translucent cellophane. Whilst I never ended up going to the event advertised on the flyer, the U.K. performance and live art scene can be surprisingly small, and we ended up crossing paths enough times to warrant the sending and acceptance of a Facebook friend request. It wasn’t actually until a while later that I realized it was her I’d bumped into that earlier day.

Being connected with Hagan on Facebook allowed me to be one of the many who witnessed her daily heart-warming and humorous updates over months on end spent in the hospital, through a sudden and unexplained illness that eventually led to a leg amputation. What came across in these posts was an incredible sense of strength, as well as a seemingly unfaltering sense of humor about the whole thing. This is something she has since described in a BBC Radio 4 interview as “an impression of someone who was coping better... creating a brand and being it.” She made the decision that she would cope, and would do so with comedy, and faked it until it became a reality.

"The most common question people ask me (other than, 'How did you get your hair like that?') is, 'Why did you have your leg off?'"

Hagan is really a remarkable woman, and also a remarkable-looking woman — with her signature rainbow hair, spattering of quirky tattoos and unconventional dress sense — and what’s really striking is how much she is working her prosthetic limb. She talks of her determination to "own" her "oddness" — an attitude that she explains predates her amputation, having always been "odd." This determination was cited by her teen fandom of Jarvis Cocker, having noticed the way he was “too tall, too gangly and too odd” to be "cool" or to be the front man of a band. But rather than trying to fight these traits and disguise them, he emphasized them, forging his own brand of "cool" and becoming a sex symbol.

Hagan recalls thinking, “I’ve noticed what you’ve done there, Cocker — I’m going to copy that,” describing how she “wasn’t gangly or tall or anything, but [she] was odd.” So whilst losing her leg understandably presented major challenges, Hagan was always determined to own it rather than letting it own her. Her show Some People Have Too Many Legs ponders the journey of “going from feeling dead embarrassed and horrible about something about yourself… where it makes your body cringe… to owning it and putting glitter on it and genuinely loving it,” questioning how to get from one to the other, and contemplating issues of love, death, class and growing up along the way.

This idea of “putting glitter on it” is meant figuratively and quite literally, too. Hagan’s style of writing and performing is endearing, optimistic and honest, sprinkled with glitter throughout, and “her metal ankle decorated with sequins, buttons, and even flashing fairy lights was featured on both the front and back of the show flyer and reminded me of a mascot, a trophy, a chalice filled with wisdom,” as Mab Jones describes in a review of Some People Have Too Many Legs.

"I consciously decided that [the amputation] was going to be a good thing, because I thought this could half break me and I'm already half broken."

Hagan’s quirky style is something she would take with her into potentially depressing trips to the prosthetist, too, protecting herself from the grim, greyscale environment by turning up in a ballgown and sneakers, something she describes as putting “a forcefield around me so it doesn’t get in.” I have openly aired my approval for the power of dressing up in my writing, and Hagan illustrates so well here how it can help provide an almost vaccine-like protection in a negative environment; how playing dress up affects your mindset and can provide you with the "forcefield" you need in tough circumstances.

Not all of us want to be Paralympians! We just want to carry on. That’s not brave, it’s necessary."

More like this
Pamela Anderson's Most Iconic Makeup & Hairstyle Moments
By Olivia Rose Rushing
Blake Lively Debuts Red Hair For The 'It Ends With Us' Film Adaptation
By Olivia Rose Rushing
The Best Beauty Looks Spotted At Paris Couture Week 2023
By Audrey Noble
15 Modernized '60s Makeup Looks & Hairstyles That Feel Wonderfully Retro
By Olivia Rose Rushing
Get Even More From Bustle — Sign Up For The Newsletter
From hair trends to relationship advice, our daily newsletter has everything you need to sound like a person who’s on TikTok, even if you aren’t.