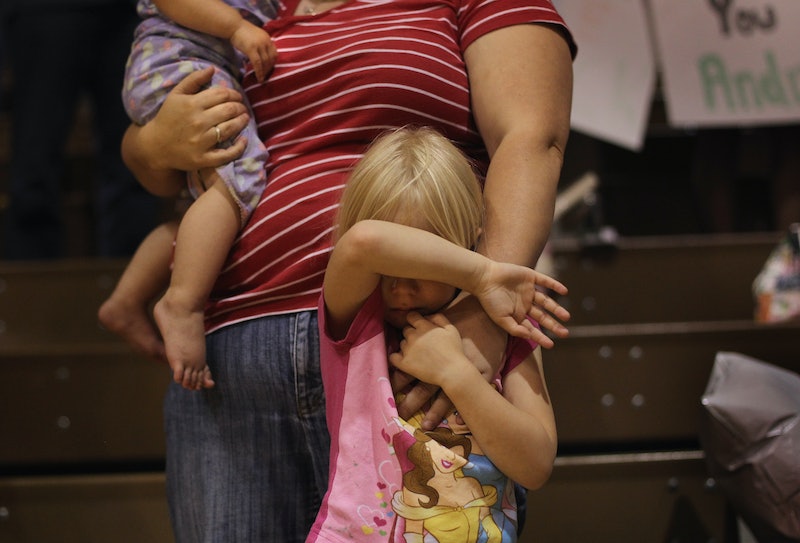 The second it takes to spank a child can lead to lifetime of consequences, according to a new study published Monday in the journal Pediatrics. Children who are spanked by parents have a more limited vocabulary, higher levels of aggression, and are generally less pleasant to be around later on in life. "There's just no evidence that spanking is good for kids," University of Texas at Austin parental discipline researcher Elizabeth Gershoff said.

Turns out that in this day and age, the dreaded line of mothers everywhere (Just wait until your father gets home!) has given way to Mom taking things into her own hands — because you know, changing family roles.

Moms aren't keeping mum about their disciplinary practices: 57 percent of moms report they've spanked their 3-year-olds, and 52 percent of mothers have spanked their 5-year-olds (compared to 40 percent and 33 percent of fathers, respectively). The study's authors found that stressed parents are also more likely to swat their offspring.

The study also found that kids who get the swat have difficulty later on with speaking and with their levels of aggression — thought that depends on who spanks them. Kids spanked by their mothers at five years old — even just occasionally — have more difficulty "externalizing behaviors" such as aggression and rule-breaking because, duh, they've been shown hitting is a way to get a desired result.

Another problem the study points out with spanking is the immediate-gratification aspect for parents: Spanking solves the problem right that very minute, but it doesn't teach kids how to "regulate" their behavior over the long run.

“Spanking does make the kid stop,” the study's lead author Michael J. MacKenzie, said. “It's strongly associated with immediate compliance. Children will change their behavior in the moment ... But the goal is to have kids regulate themselves over time. And in that, spanking fails.”

Basically, the whole physical punishment thing backfires for parents, because it teaches kids to be reactive — not reasoning — creatures.

"When (children) want another kid's toy, the parents haven't taught them how to use their words or how to negotiate," Gershoff said. "Spanking models aggression as a way of solving problems, that you can hit people and get what you want."

The in-depth study also found that kids who are often spanked by their dads at five years old have issues with vocabulary by age nine: Kids tested at that age had lower vocabulary scores than kids who weren't spanked, raising questions about whether physical punishment can invoke enough trauma on a kid to shake them up cognitively. Gershoff (who wasn't involved in the study), doesn't think it should effect their intelligence.

The U.S. is one of the few "large-income" countries that has not yet banned the practice of spanking.

We all know that three-year-olds can sometimes be the most insufferable little creatures on the planet, and sometimes, there is just no. holy. way. So what to do?