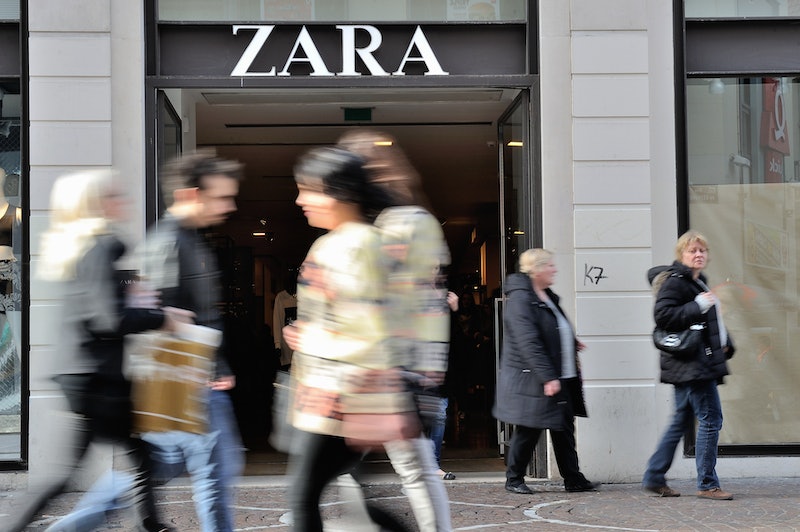 We hate to break it to you, Moschino, but it is in fact Zara that is the new McDonald's of fashion. Zara is taking the lead in fast fashion, but what does that mean? Fast fashion is the ability of a retailer to generate quick turnover of merchandise in the stores. In the fast fashion industry, new designs and styles are shipped at an intensely rapid rate. The consumer of fast fashion knows to buy an item he or she likes when he or she sees it. Usually, there are very few basics in the collections sold by these retailers and there are also very few reorders.

Zara is a major division of a larger Spanish retailer called Inditex. The Inditex Group aims to have all merchandise delivered from its factories in just three weeks. This could be why Zara is often on the nose of the most recent trends. A tactfully made replica of the incredible look you were admiring on Style.com from Paris Fashion Week could be in Zara stores in as little as three weeks. The designers that work on Zara work on new styles daily and they are reviewed and put into production on the same day.

At the end of the fiscal business year in 2014 (which really ended this January 2015), the Inditex Group had ended with $19.7 billion. Its sales have increased by 8% since the previous year. They were out done only by H&M who ended their year in sales with $20.2 billion. Zara has one 1,923 stores in eighty eight countries. Zara contributed to the Inditex Group's total sales for the fiscal year 2014 with $12.6 billion. 53 of Zara's stores are located in the United States.

The Inditex Group's other retailers include Zara Kids, Pull&Bear, and Massimo Dutti. I would expect to see a lot more of these stores in the United States opening in 2015.