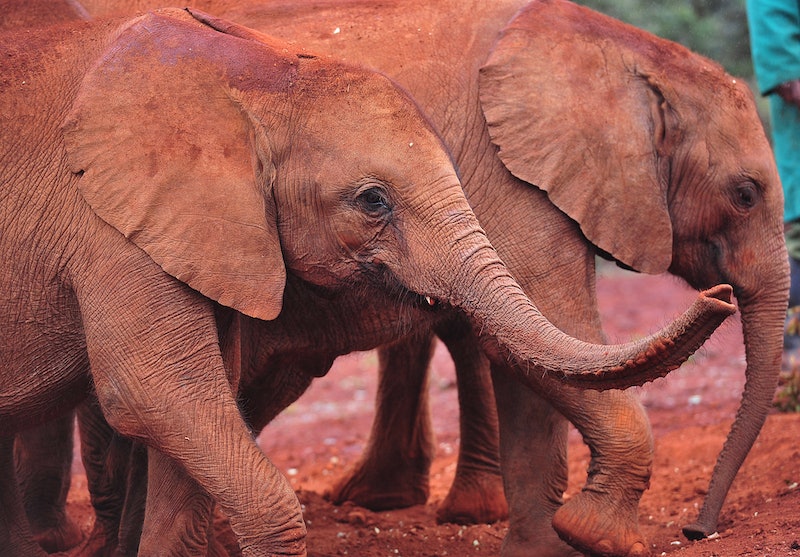 You wouldn’t have to do much digging in the great infinite void that is the Internet to find a corner of long-forgotten YouTube videos of animal mamas getting real protective about their young, or doing something unequivocally heroic to protect them. More recently, a video has surfaced from India of an elephant mom who saves her baby after attempting to dig the calf out of a well for a staggering 11 hours. Spoiler: Both the elephants are fine, but you might need the tissues near-at-hand anyway.

Express reports that the calf slipped into a muddy well, and in a desperate attempt to get her baby out, the mother actually made the situation much worse by accidentally filling the well with more mud (keep in mind this is a very large animal). Because she was so heavy and the mud around the hole was so slippery, her weight kept shifting mud into the well when she neared the edge to reach down with her trunk and pull her calf out. It was...stressful, to say the least.

A large crowd of people can be seen gathering around the well in the video, seemingly unsure of how to help. After watching this get progressively worse, a few villagers intervened.

And this is the part that’s a heartbreaker. Watch as she looks up like, Can one of you please help me out here?

Express interviewed Jitendra Tiwari, the man who shot the video, and inquired about how they managed to alleviate the situation and separate the mother long enough to hoist the little one out. “We chopped off a few banana trucks and put it near the well so that the mother elephant moved away for sometime,” he said. “The plan worked and we used the time remove the heap of sand deposited near the well that was making it difficult for her to rescue the baby.”

Watch the full harrowing video (complete with its happy ending!) below: