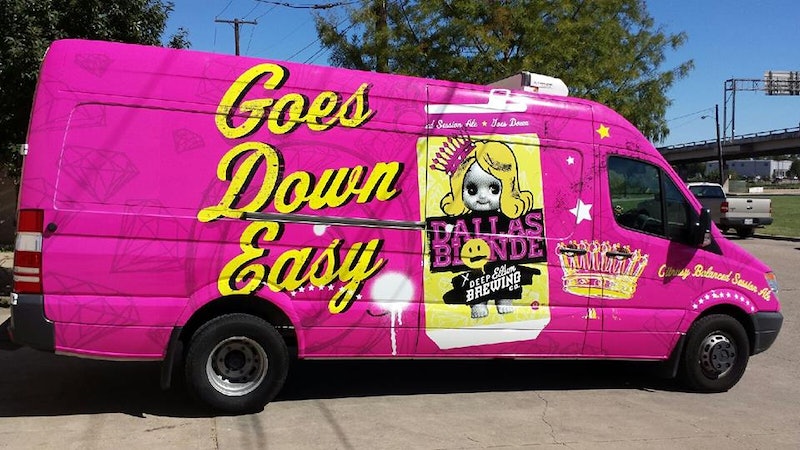 Beer and other alcohol advertising isn’t exactly woman-friendly, but a Dallas-based craft brewer has taken sexism to a new level. Deep Ellum Brewing Company, purveyors of pretty decent craft beers, recently became the target of criticism that the marketing campaign for their Dallas Blonde beer is both sexist, and perpetuates rape culture. Genevieve Cato of Burnt Orange Report was among the first to write about the marketing campaign. On both the cans of beer and a van that transports them, Dallas Blonde boasts the tagline “goes down easy.”

When Deep Ellum Brewing Company became aware of these criticisms, they told the Dallas Observer’s Scott Reitz “we're not saying that all blondes go down easy,” and that if enough people had complaints about their marketing strategy, they would “drop the marketing.” What’s worse, though, is that DEBC’s John Reardon acknowledges that beer companies use sexist tropes to peddle their wares. Reardon, in the interview with the Dallas Observer, seems to use this reality as justification for the Dallas Blonde marketing campaign.

When I became aware of the Dallas Blonde marketing campaign, I tweeted at @DeepEllumBrewCo to let them know that I, as a beer drinker and Dallas resident, found the tagline to be sexist and, much like Genevieve Cato, another reinforcement of rape culture. The brewery’s response to my criticism proved how tone-deaf they are to the idea that their marketing might be sexist.

Apparently, the idea that their sexist campaign is offensive makes me an asshole. I’m pretty OK with that assertion, especially after Deep Ellum Brewing Company used their next several tweets to attack women with criticisms, make rape culture jokes (now deleted), and agree with one user that their critics are “whining trolls.” In this case, it really takes one to know one.

Many of these tweets have since been deleted, likely because Deep Ellum Brewing Company’s ad agency told the company that they were bad for business. As usual, the response to women with criticisms, including myself, was that we needed to just lighten up and enjoy the beer — according to both online commenters and DEBC itself.

While this is only a small brewing company in Dallas, the Dallas Blonde Goes Down Easy marketing campaign is just one piece of an industry that is dedicated to sexist marketing. As Genevieve Cato points out, Belvedere Vodka was criticized last year for a campaign that included rape-culture reinforcing messaging like “unlike women, Belvedere always goes down easy.”

A lot of people, men in particular, have no idea how “goes down easy” correlates to rape culture. For women, though, this messaging is just part of the overall culture in a country that sets rapists free and sullies the reputation of rape victims. As these beer cans suggest to many, a Dallas Blonde will always go down easy, whether she wants to or not.

It must be easy for Deep Ellum Brewing Company to dismiss these critiques as the whining of humorless feminists. Their demographic, as evidenced by their marketing communications and overall brand presence, leans heavily to the bro side. Because of this, it is likely that their audience really appreciates the way that DEBC handled this criticism — putting the onus on women and feminists to just not interpret sexist things as sexism. It’s just a joke!

It is easy for men to dismiss rape culture as something that doesn’t exist, simply because many are deeply invested in perpetuating it. This isn’t to suggest that men aren’t raped, but most perpetrators of sexual assault are men, and most victims are women. In comments on Deep Ellum Brewing Company’s Facebook page, many of which have now been deleted due to “profanity,” women and men were pretty clearly divided about the campaign.

One user left this brilliant observation: “Goes Down Easy, in a van? Man, just like High School!” These kinds of comments (and the ideologies that make them possible) are deeply harmful, especially in light of the fact that someone in this country is sexually assaulted every two seconds. Not only are these grown-ass men making gross assumptions about women, they’re perpetuating the idea that women are obligated to have sex with men without complaint.

The brewery has also said, as mentioned before, that if enough people complain, they’ll drop the campaign. If the Dallas Blonde marketing campaign offends you, let Deep Ellum Brewing Company know on Twitter.

More like this
The 7 Best White Face Paints For Halloween In 2022
By Maria Cassano
20 Smart Devices Under $35 That’ll Change The Entire Vibe Of Your Home
By Emma Carey
Black History Month UK’s 2022 Theme Calls For Action, Not Words
By Maxine Harrison
Chris Kaba's Family Continue Fight For Justice After Viewing Police Bodycam Footage
By Sophie McEvoy
Get Even More From Bustle — Sign Up For The Newsletter