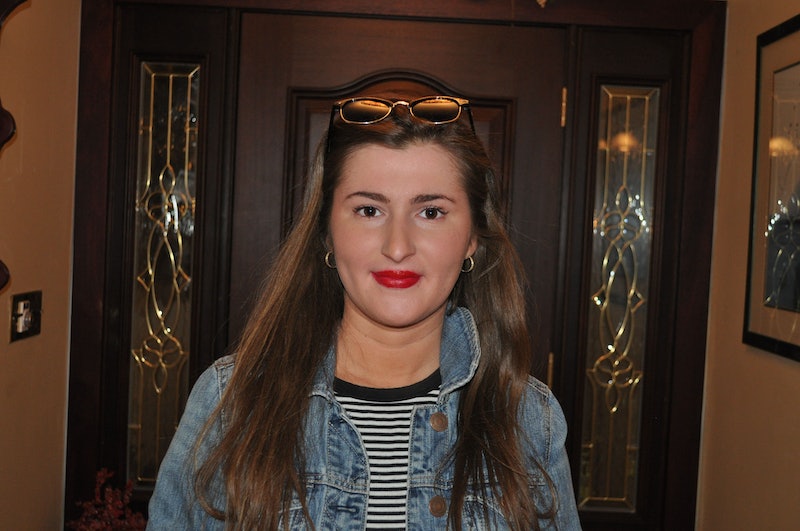 I should tell you that I hate lipstick. It is something that I just don't do. I can never choose a color and I'm like a three-year-old with a coloring book when it comes to applying the stuff (actually, that's insulting to toddlers). But April is Sexual Assault Awareness Month, so I will absolutely be sporting a red lip to show my support for an extraordinarily worthy cause. You might be wondering what the hell red lipstick has to do with sexual assault, so just stick with me for a moment. I will be doing this in support of a nonprofit organization called "Red My Lips," whose mission is to educate the world about sexual violence and give a voice to a community that often goes unheard. Their website reads: "Red My Lips is designed to raise visibility and awareness about the realities and prevalence of sexual violence, while combatting rape myths and victim-blaming."

The founder of Red My Lips, Daniella Tansino, was raped in 2011, and after a traumatic experience with the court system, she was told that they would not prosecute because, "Jurors don't like girls that drink." It should be noted that a female district attorney was the one who said this. Subsequently, Danielle decided to start this organization to fight for social justice — to be seen and heard. The core message of Red My Lips is to promote the idea that rape is not a victim's game. We should be able to swipe on red lipstick, wear short skirts, tight tops, and high heels if we want to and that does not give anyone the right to use it against us. Rape is never the victim's fault, and this is something that needs to be drilled into the minds of every human in this world.

Red My Lips is about standing in solidarity with your fellow woman. Because statistics say that one in four college women will survive rape or attempted rape, and every two minutes someone in the U.S. is sexually assaulted. And those odds are truly horrifying. I'm wearing red lips this month as a visual message that a woman is never asking for it. But here are seven other reasons why you should be wearing red lips this April.

Of course, wearing red lipstick is not enough, in and of itself, to combat sexual violence. You can visit RAINN (Rape, Abuse & Incest National Network) for guidance on how to help the cause even more deeply.

As a college student, I am wearing red lips to show that it is okay to speak out about what happened to you. Women shouldn't have to feel afraid that they won't be taken seriously or that their rape will be doubted by the authorities.

The National Sexual Violence Resource Center is a great resource for information on how to prevent sexual violence on campus. They also offer planning tools for campaigning and spreading awareness of on-campus violence.

3. You Will Most Likely Know A Sexual Assault Victim Personally

The likelihood that you know, or will know, someone who has been sexually assaulted is very high according to the statistics I mentioned above. So, don't just wear red lips for Danielle Tansino; do it for your loved ones who have been through this trauma.

If you feel like supporting efforts by resources such as RAINN, please donate. Any little bit helps spread awareness and prevention of sexual assault.

If you or anyone you know is struggling with severe depression and contemplating self-harm, there are people on call 24 hours a day at organizations dedicated to helping. The National Suicide Prevention Lifeline is available all day, every day.

I don't care if she is walking through the streets buck naked, she is not asking to be raped. One of the main reasons Danielle started this campaign is because through her own experience, she realized how common it is for victims to feel shamed or silenced even by their loved ones. "Though it is probably hard to imagine, those responses were more jarring and traumatizing than the assault itself," she said in an interview with Classy.org.

No matter where you are, there are local organizations specialized in helping victims of sexual assault. RAINN offers a user-friendly way of seeking them out.

6. Because She Is More Than Her Rape

I am wearing red lips to show women who have been through sexual assault that they are not their experience and that they can get through this. It doesn't have to define them. They can choose not to be a victim, but a survivor.

If you're a student and interested in helping victims, discover the many ways of volunteering here.

This may sound vain, but it's true. And I think we need a little levity after such a heavy conversation. Red lips looks good on everyone, and subsequently have the power to inspire confidence, self-love and self-worth.

There are ways to help women that extend beyond sexual assault prevention, specifically. EmpowerWomen.org, for instance, is an inspiring resource geared at opening the discussions surrounding all equality when it comes to women's rights.