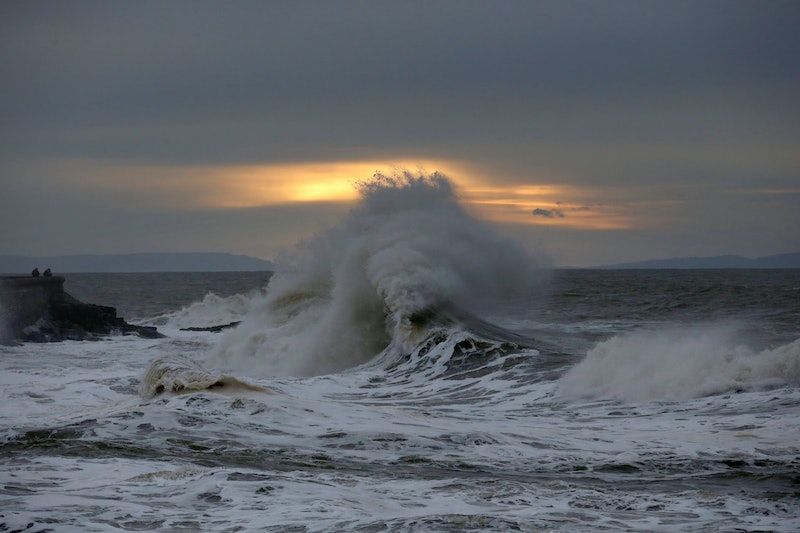 There was a brief period from the late eighties to the mid-nineties that we were all very bitter about not being mermaids, thanks to a certain redheaded princess with absolutely no heed for parental authority. I eventually got over not being a mermaid, mostly because there are Starbucks on dry land (go team human world) which takes the edge off having to be land-bound, but staring at photographer Ray Collins' stunning photos of ocean waves is enough to make me change my mind all over again. He has compiled the remarkable photographs in a book called "Found At Sea". The book has become such an instant hit that the first edition has completely sold out.

Ray stumbled into this passion almost by accident, venturing out to the beach with surfer friends in 2007 to take pictures for fun after a long shift at his coal mining day job. (Everything about this guy is super hot, by the way. I meant to warn you. A coal miner who surfs and takes incredibly beautiful photos? I mean.) Since then, he has found his passion capturing waves at the most unexpected and fleetingly beautiful moments. Collins, who is color blind, says that the primary focus of his images is "freezing the ephemeral relationship between water and light". He chronicles a lot of his daily adventures on Instagram, and has also shot an entire series of surfers in motion.

Capturing these photos means that Collins begins every morning rousing himself up into the dark, and venturing into freezing cold waves — but as he says on his site, he doesn't feel at home anywhere else. It's hard to believe that there is a human behind the lens in some of these images because they are more terrifying than I imagine King Triton would be in the throes of a "why did my teenage daughter rebel against me when I had such sound parenting skillz" tantrum.

Here are some of the shots he has shared with his followers on Instagram:

Collins has captured these iconic images in beaches all over the world, and his work has been featured in countless exhibitions, international ad campaigns, and publications, including National Geographic, Apple, Nikon, and Patagonia.

Collins has an online store where a huge number of these photos are available as prints. If you can't live in the ocean, I imagine decking every one of your walls with these is the next best thing.