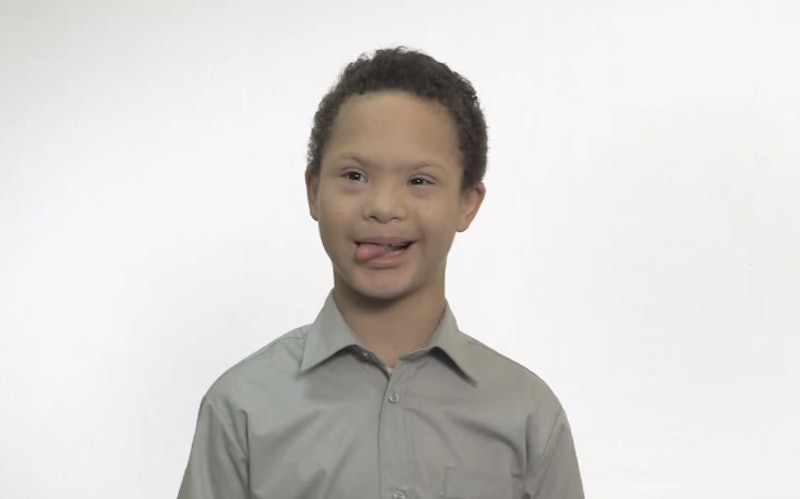 March 21 was World Down Syndrome Day, a UN-recognized international awareness day dedicated to raising awareness of Down Syndrome and its affects on all of our lives and communities. The official holiday may have passed but we still have plenty of time to learn about this disorder and what it means for people living with it—and what better way then with a video of astonishingly adorable children? Brother and sister team Paul and Lauren Costabile recently released an awesome video starring kids living with Down syndrome. Their message? We’re “More Alike Than Different.”

As described by the National Down Syndrome Congress, Down Syndrome is a “common genetic variation which usually causes delay in physical, intellectual and language development.” Approximately 5 thousand children with Down Syndrome are born in the United States every year, with a quarter of a million families affected by the disorder. The mental and physical effects of Down Syndrome vary widely from person to person, and many people with the syndrome go on to have fulfilling lives as adults with jobs, relationships, and varied recreational interests.

The video below shows a bunch of kids with Down Syndrome being asked basic questions about their lives. The (often hilarious) results show that they are just like children who don’t have the disorder. For example, when asked about their favorite foods, the kids list popular foods like pizza, pasta, quesadillas, and something called “spaghetti-tacos”. (I don’t know what a spaghetti-taco is, but it sounds amazing.) When asked what they want to be when they grow up, their responses include being a fireman, a doctor, an astronaut, a Power Ranger, and “a rock star just like Taylor Swift.” One kid brings out all the feels by simply replying, “I want to be happy.”

My favorite part is when the kids are told, “Make your best silly face…” Their expressions are priceless:

Paul and Lauren Costabile are also working on a show called Bailey’s World that purports to be “The First Ever Animated TV Series About Down Syndrome.” Check it out on their YouTube page. To find out more about Down Syndrome, visit the National Down Syndrome Society.

More like this
Bustle Newsletter: September 21, 2022
By Stephanie Talmadge
Bennifer, Kravis, & 14 Other Fun Celeb Couples Halloween Costume Ideas
By Emma Carey and Brittany Leitner
Why Harry Styles & Olivia Wilde Make A Great Couple, According To Astrology
By Nina Kahn
This Psychological Effect Might Be Keeping You From Hitting Your Goals
By Lexi Inks
Get Even More From Bustle — Sign Up For The Newsletter