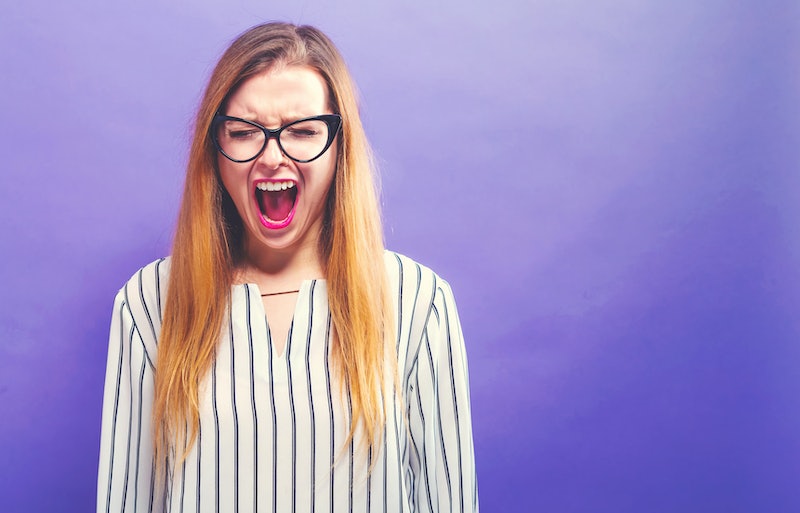 Anyone woman who has lived with severe PMS knows it's not a joke. But there's now some intense debate in the medical community about whether or not Premenstrual Dysphoric Disorder, or PMDD, should be considered a mental disorder. As of May 2013, PMDD was officially classified as a distinct mental disorder in psychiatry's bible, the Diagnostic and Statistical Manual of Mental Disorders. But some people are warning that this could spell bad news for women in the long run.

According to a report today on NPR, psychiatrists define PMDD as "a fairly rare syndrome that prompts disabling emotional and sometimes physical reactions" to hormonal fluctuations during the menstrual cycle. Symptoms typically onset during the span between ovulation and the first day of a woman's period and include severe depression and anxiety. These symptoms more closely resemble depressive and anxiety disorders than run of the mill PMS. It's estimated that PMDD affects between 3 and 8 percent of women having periods (though some say it's as little as 1 percent).

Not everyone thinks that PMDD should actually be considered a distinct condition. Sarah Gehlert, a researcher at Washington University in St. Louis, told NPR that she worries the diagnosis could be used against women.

"Say a poor woman was in court, trying to see whether she could keep custody of her child," Gehlert says. "Her partner's or spouse's attorney might say, 'Yes, your honor, but she has a mental disorder.' And she might not get custody of her children."

At the very least, Gehlert worries that PMDD could be overdiagnosed, pathologizing healthy women who were experiencing normal hormonal shifts. After all, she says, there's a lot of money to be made from it.

One textbook example is the prescription drug Sarafem, which was approved by the Food and Drug Administration in 2000 as a treatment for PMDD. In reality, Sarafem is identical to the widely prescribed SSRI antidepressant Prozac, or fluoxetine. The patent on Prozac was about to expire, and manufacturer Eli Lilly faced losing market share to generic versions.

So Eli Lilly gave Prozac a new name, Sarafem, and painted it pink. What had been a generic drug that cost 25 cents a pill was marketed as a PMDD-specific drug for $10 a pill.

But for women who suffer from intense emotional reactions once a month, the diagnosis feels real enough. As one of them told NPR: "There comes a point where you need to realize there is a name for what you're going through. It helps you to realize that you're not alone in your struggles."

More like this
It's A Pleasure #53: Help! My Boyfriend Won't Tell Me Why He Stopped Going Down On Me
By Sophia Benoit
Wondermind Just Launched A Site That's All About Supporting Mental Health
By Carolyn Steber
This Psychological Effect Might Be Keeping You From Hitting Your Goals
By Lexi Inks
The 5 Best SLS-Free Toothpastes, According To Dentists
By Amy Biggart and Danielle Calma
Get Even More From Bustle — Sign Up For The Newsletter