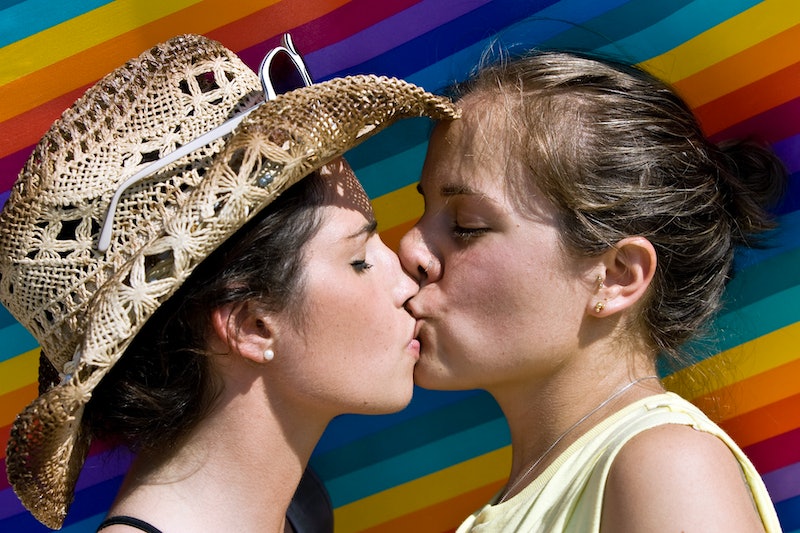 It's the time of year we've all been waiting for: The results are in for Autostraddle's Ultimate Lesbian Sex Survey. A survey administered by the popular girl-on-girl website, its goal is to find out what kind of sex women are having with women: How they're doing it, what gets them off, and so on and so forth. Because there's so little formalized research on the topic, Autostraddle is leading the way in tracking information and trends within the girl-on-girl world — and for a ladyqueer like me who is really into learning about what other ladyqueers are up to, the survey results are basically like an early Christmas.

The survey, which is officially called "The Ultimate Lesbian Sex Survey (For Lady Types Who Sleep With Lady Types)," was taken by over 8,000 people, 89 percent of who were between the ages of 18 and 36. It touched on all sorts of sex and relationship-related questions ranging from "how often are you having sex?" to "are you happy?". In her discussion of the survey, Autostraddle CEO, CFO, and Editor-in-Chief Riese compared the results to research done by and about heterosexual people; however, while I think it's certainly interesting to look at trends through the lens of comparison, I'm actually more interested in looking at the survey in a way that keeps queer women at the center of it. As such, that's the way I'll be examining the results here — head on over to Autostraddle to check out Riese's comparisons.

That being said, let's check out some of the results of the survey and what they mean for queer women (full disclosure: I participated in the survey myself, so my own answers contributed to the results):

1. The majority of queer women are having sex multiple times per week.

2. Women in monogamous and non-monogamous relationships have sex with roughly the same frequency.

Contrary to popular belief, the results of the survey show that it doesn't matter whether you have one ladybae or multiple ladybaes: The amount of sex you're having is probably roughly the same. In both types of relationships, about 35 percent of women are having sex multiple times per week, a little over one percent are having sex more than once a day, and about 25 percent are doing it a few times a month. The only group that has some drastically different numbers is the group of women who reported to not be in a relationship at the time of the survey; about 50 percent of those women reported having sex less than once a month.

3. Most queer women are happy in their relationships. YAY!

Only three percent of women who took the survey reported being unhappy in their relationships, and 86 percent reported being happy or ecstatic. These results also tied in pretty closely with the results about sex — that is, the more often you have sex, the more often you're likely to report that you're happy or ecstatic in your relationship, especially if both people are initiating sex an equal amount of times.

The results of the survey were, overall, pretty positive. It would be interesting to have more demographic information besides just age to see exactly the background and makeup of the women who are having such positive experiences with sex and partnership — but in the meantime, go have a lot of happy, healthy, communicative sex and be all lovey and doe-eyed with your lady loves.