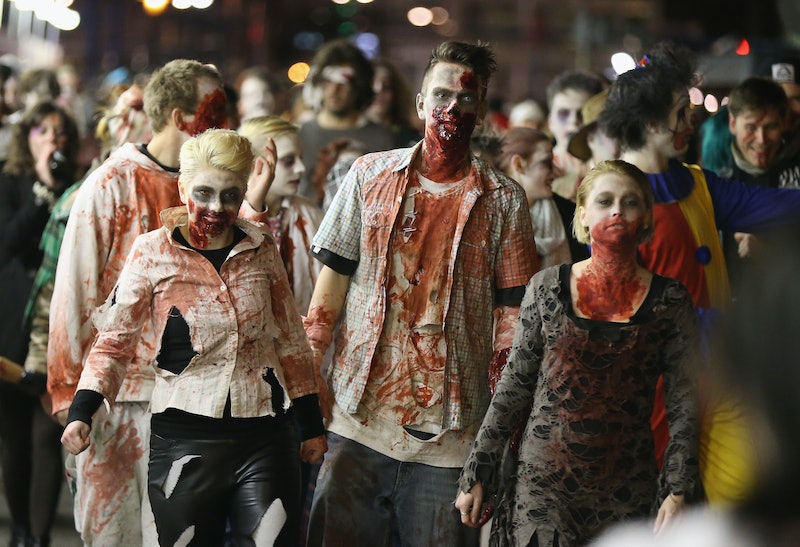 I don't know about you, but I'm ready for the zombie apocalypse. I'm going hammer in one hand, huge knife in the other, and I'm going to bust some brains, The Walking Dead-style. And of course, my sidekick is going to be a Norman Reedus lookalike because what would the zombie apocalypse be without a dirty, sexy male archer friend? Not everyone is as ready as I am, however, which is weird considering the saturation of zombie apocalypse narratives in the media. Like these women who were victims of a zombie attack prank on an empty subway train. None of them were ready for it. And yet all of them immediately believed that the actual zombie apocalypse was upon us.

As far as pranks go, this one is pretty elaborate. A bunch of people are made up, in detail, to look like pretty convincing zombies. Then, somehow, a woman (or in one case a few women) are on an empty subway train that stops at an empty station. The lights flicker, the doors fail to open—and then the zombie appears. Every single woman immediately starts screaming, because that's how willing people are to believe that zombies are attacking them. Which is weird to me considering a lot of people don't believe in global warming, or think dinosaurs are a government conspiracy. That stuff? Pssh—fairy tales. But actual zombies coming to eat your brains? Yeah, that shit could happen for sure. Anyway, the prank is sort of mean given the sheer terror that possesses the women, but I'm impressed by the amount of effort that went into it. Watch some terrified women shit themselves below:

Does anyone else kind of love that there's no part in this video where we see the women laughing the whole thing off upon realizing it's a joke? That's supposed to be in videos like this! I somewhat love that it isn't. Way to unabashedly have no chill at all, prank people.

Here are some much better pranks that require much less effort (you can do them at home yourself!) and are a million times less mean:

2. Jumping out of a box (or a closet or from behind a door. Basically just unexpectedly jumping out.)

4. A whoopee cushion (because some things never go out of style. Also, farts.)