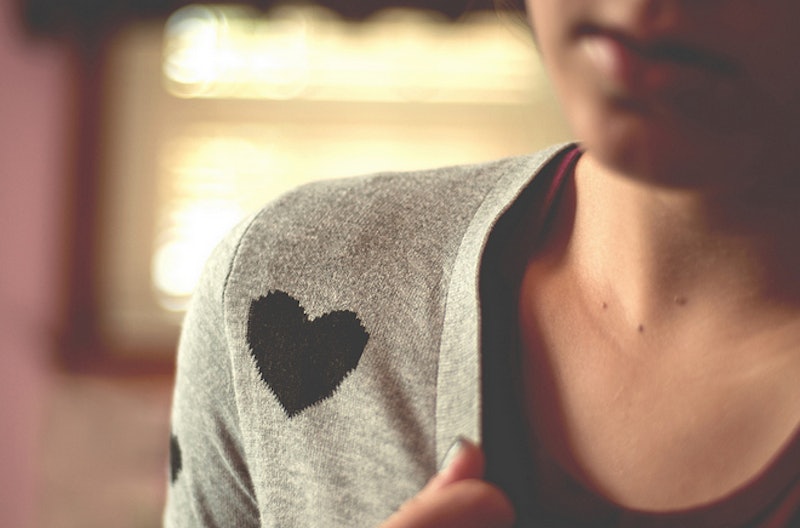 It's a tale as old as time: Someone meets a romantic prospect that's a little bit...off. Maybe he's a playboy, or maybe she's chronically aloof. And the person who just started dating them, who likes them, starts to think to themselves, "I can make them change that." If you've ever thought that, I've got a little memo for you: You're delusional. I'm sorry, I guess I should maybe say that in a gentler way, but there's really no time to beat around the bush. Your happiness is on the line, so let's be clear: You are completely delusional if you ever think that you can change someone. People can change. YOU cannot force that change to happen. Period. There are no exceptions. There are no special circumstances. Every circumstance you're a part of will feel special and unique and subjectively immune to this universal truth, but it's not.

Embarking upon a relationship based on the idea that you will change a tragic flaw in the other person is basically the worst thing you can think about getting yourself into with another person, whether it's a family member, friend or lover. I once had a girlfriend who had some issues—a lot of problems with her self-image, mostly—and who consequently acted out against me all the time. I loved her a lot, and I convinced myself that I could make her change and see things differently. But she was perfectly comfortable feeling the way she felt, and acting the way she did, and after going through a lot of heartache, I realized a really important thing about changing other people, and that is that it's a vain endeavor.

I believe you have to accept people the way they are. There are some very small and specific exceptions. For instance, if someone you love has dangerous habits. If they smoke, take drugs, or do something illegal or hurtful to others, it's your responsibility to help them out (to a certain point, anyway). But at the same time, you have to realize, even when you're right about something, like telling someone not to smoke, it doesn't mean they're going to do it. And at the end of the day, you have to decide what is right for YOU. Here are some brutal truths for you if you think you're going to go about changing or fixing people:

That's about as simple as it gets. YOU. CAN'T. CHANGE. SOMEONE. Yes, people change. I've seen people change. I've changed! But people change because they want to change. They don't change because you want them to. And even if you've had someone change in a way that you wanted them to (for instance, un uncommunicative person becoming more communicative) it's because they saw merit in your way and decided FOR THEMSELVES to change their habits. Change comes from growing through learning, and can only happen when the person changing is complicit. It cannot, I repeat, CANNOT be forced upon someone by you.

People are who they are and they're going to do what they're going to do. That sounds super general and cliché, but read it and re-read it a hundred times until it feels undeniably real. Because it is. If that's not good enough for you, or offends you, or you simply don't like it, walk away. Because that person is going to do whatever the hell they want, and there's nothing you can do about it. No matter what you try, nor how hard you work, the only thing you can really effect is yourself, and even then, there are some things that are still completely out of your control. Accept that everyone is autonomous, and that we are all the way we are.

3. You're responsible for your own unhappiness

It's really hard to hear that the person who's responsible for your unhappiness is you and you alone. Sure other people can do terrible things to you, but when all that's said and done, you're the one who decides what to do next. If you decide to wallow and be sad, then that's your choice. If you choose to do things that excite you and move on with your life, that's probably a much better choice. You already know this stuff! This entire article is like a friend who loves you sitting you down, grabbing your shoulders, and telling you directly to your face all the things that you really, truly do know, but need to hear again.

A really good way to make yourself unhappy and completely unsatisfied is by trying to change someone, because as I've addressed, they're not going to change for you. That's not their problem. They're just living their life. You're the one taking on the onus and angst of the feelings you get when they don't behave the way you want them to. That's on YOU.

4. You're kind of being a jerk right now

Leave people alone. If you don't like someone, that's your problem, not theirs. If that someone is a person you're dating, your friend, or a family member (i.e., someone you "care about"), the best way to make them feel bad about the way you feel about them is to keep trying to make them change. Think about it: If you're constantly on someone's back, criticizing who they are and what they do, how do you think that's going to make them feel? You're kind of being a super jerk when you try to change someone. You have accept the way someone is, unless they're doing something dangerous to themselves or people around them. For instance, it's fully okay to nag someone about something like drunk driving. It's not okay to nag someone because, for instance, they like eating a lot of soup, which you for some weird reason hate. Other than that, accept who a person is or at least learn to shut up about it.

5. You're being a control freak

Generally speaking, people who are always trying to change people around them are people who are trying to control things. You're a control freak. That's okay, you are who you are. But it's your responsibility to attempt to curb the way that effects you and others. You can really destroy relationships by constantly trying to control everything. Because as we've established, pretty much everything is out of your control. Sorry, dude.

Here's the real clanger: You're not perfect! You could probably use some "changes" too, like maybe relaxing and trying not to change people so much? Just a thought. The whole "people in glass houses shouldn't throw stones" thing is real. And guess what? We're ALL in glass houses. Everyone is flawed and no one is even approaching perfection. There's no evidence that your way is better than anyone else's, so quit with the high horsing and get on with your own life. If you don't like someone, you don't like them. Move on. There are probably plenty of people out there who don't like you and haven't let it consume them.

More like this
How To Politely Reject Someone Who Keeps Asking You Out
By Laken Howard and Lexi Inks
Help! My Boyfriend Won't Tell Me Why He Stopped Going Down On Me
By Sophia Benoit
10 Ways To Be More Empathetic To Your Partner
By Raven Ishak and Lexi Inks
The Differences Between Kinks & Fetishes, Explained
By Lexi Inks
Get Even More From Bustle — Sign Up For The Newsletter