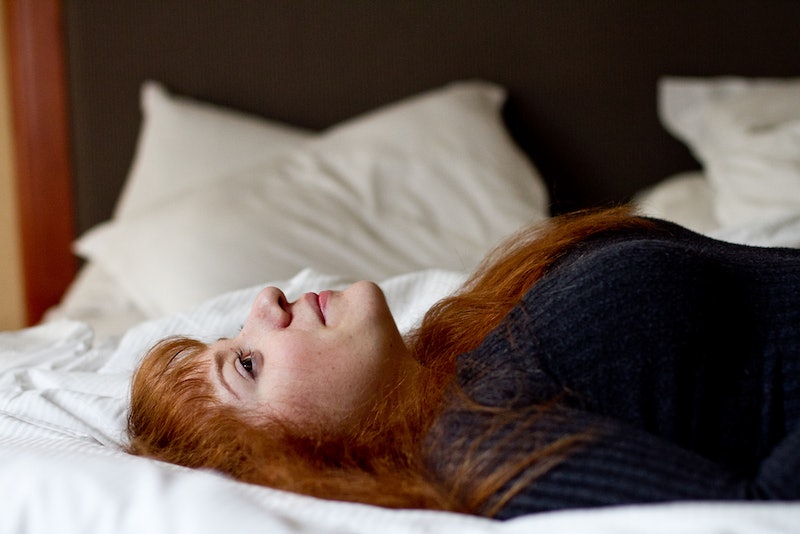 You may have heard the name before, but have you ever actually asked the question, what is Exploding Head Syndrome? It sounds like something out of a Dr. Seuss book, but it's totally, 100 percent real — and it might affect a significant number of young people, according to new research. Unfortunately not much is known about it right now; it's a little-understood condition with minimal research having been done to explore its effects. But Brian A. Sharpless, a psychologist at the University of Washington, has taken it upon himself to learn more. Here's what he found out.

EHS is a condition that involves sufferers hallucinating sudden, loud noises when they're falling asleep or waking up, according to Science of Us. It seems to have some sort of vague connection to sleep paralysis, in which those affected feel completely paralyzed as they are falling asleep or waking up and cannot speak, react, or breathe deeply (I personally suffer from sleep paralysis and can tell you it's scarier than the most frightening horror movie I've ever seen). Sharpless did a study on 211 college students with sleep paralysis and found that a fifth of the participants had experienced EHS before — which runs contrary to previous belief about the condition which was that it mostly affected women in their 50s.

While EHS and sleep paralysis are certainly strange and mysterious, they're not the only sleep disorders out there. Check out some of these conditions that can make the comfort of sleep melt away into misery, exhaustion, and fear:

People affected with KLS can go through weeks or months at a time where all they do is sleep, hallucinate, and have mood swings, sometimes only moving to go to the bathroom and eat food. 70 percent of people diagnosed with KLS are adolescent males.

Most people have internal clocks that make it so we wake up with the light and go to sleep as it gets dark. People with free-running syndrome, however, don't have as strong a hard-wired biological clock, which skews their timing and causes their sleep cycles to be completely irregular and unpredictable. This disorder is commonly found in people who are visually impaired and lack a sense of light, but can also affect people with vision.

This disorder causes people to act out their dreams in their entirety, which involves kicking, punching, moving around, walking, and talking. It sounds funny, but can actually be pretty dangerous for the people who suffer from it — or a partner who's at risk of getting hit in the face all because of a passionate kung-fu dream.

Sleep apnea sufferers stop breathing in their sleep, only to be woken up by their bodies so they, you know, don't suffocate. People can stop breathing once or multiple times per night and wake up in the morning with no recollection of the event.

So next time you're about to go to sleep in your comfy bed and are irritated that your thoughts are keeping you up late, remember: It could be a lot worse.

More like this
This Psychological Effect Might Be Keeping You From Hitting Your Goals
By Lexi Inks
The 5 Best SLS-Free Toothpastes, According To Dentists
By Amy Biggart and Danielle Calma
15 Easy Pranks To Play This Halloween
By Emily Kelley and Lauren Grant
Bobby Berk Explains How To Maximize Every Inch Of Your Bedroom Storage
By Marilyn La Jeunesse
Get Even More From Bustle — Sign Up For The Newsletter