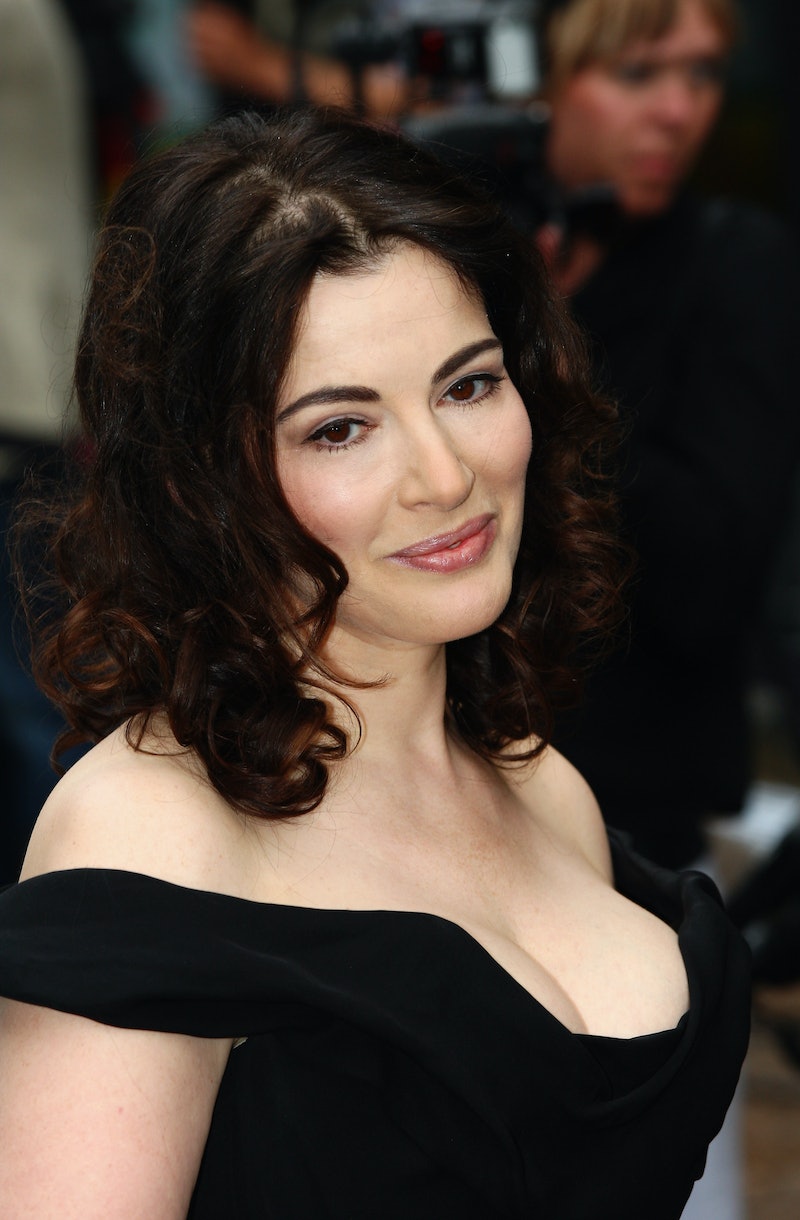 It’s been a rough year for Nigella Lawson. Earlier this year, her estranged husband Charles Saatchi was photographed with his hand wrapped around her neck while dining at a London restaurant. After the highly publicized abuse, Saatchi filed for divorce because Lawson didn’t defend him from the media’s criticisms. As a result, Nigella Lawson has been largely absent from the media, until last Sunday.

In an interview with The Observer’s Food Monthly, Nigella Lawson told Elizabeth Day that she was “baffled” to be asked if she was a feminist, as the answer is “so-self evidently a yes.” Lawson then went on to blame feminism for women feeling “a sense of dread in the kitchen” since the movement encouraged women to work outside of the home.

“Women of my generation were keen — rightly — not to be tied to the stove, but the ramifications of this were that they felt a sense of dread in the kitchen. How can this be good for anyone? I also feel that to denigrate any activity because it has traditionally been associated with the female sphere is in itself anti-feminist,” Lawson told Observer writer Elizabeth Day.

This criticism likely comes from second wave feminism’s criticism of housework. In this wave, feminists like Betty Friedan and Gloria Steinem sought to empower women to consider pursuing high-paying careers that fulfilled their interests rather than solely focusing on raising children or cooking for their husbands.

In Nigella Lawson’s view, this criticism of “women’s work” has made cooking a chore instead of a fun activity. For many women, though, cooking is still a chore that has to fall in between a busy work schedule and raising children.

Lawson’s position is an interesting one to take. As a journalist-turned-chef, she has to work with some of the worst egos in the industry — professional chefs. Most chefs are men, and the industry is famous for its sexism. Even though women are doing most of the cooking in family homes, male chefs are on TV and making the big bucks whipping up good dishes.

Nigella Lawson has been on a mission to make housework chic for a while now. She considers her book, How To Be A Domestic Goddess, to be an “important feminist tract.” As someone who considers domestic work to be a perfectly fine feminist act, I agree with Lawson that there is no empowerment in being unable to cook for yourself.

That doesn’t mean, though, that I’m willing to blame feminism for making women wary of the kitchen. To me, it seems that the rigid expectation that women are supposed to work (or not), clean, cook, take care of kids, and keep their husbands happy is what has created “kitchen dread.”

To blame feminism for keeping women out of the kitchen is to assume that it seeks to punish women for doing “women’s work.” I don’t think that is the case — most feminists seek to empower stay-at-home moms, homemakers, career women, domestic workers, and everyone in between. This assumption is harmful, and can send women who enjoy this work away from the movement.

If Nigella Lawson considers herself a feminist and wants to empower other women to cook — and it’s pretty clear that she does — she should talk about the sexism in the food and cooking business. It’s not particularly productive to suggest that women cook less because feminism told them that it was inferior work.

More like this
Women Around The World Are Cutting Their Hair In Solidarity With Mahsa Amini
By Darshita Goyal
At 28, Melanie C Was Falling In Love & Reclaiming Her Confidence
By Olivia-Anne Cleary
Self Esteem's “F*cking Wizardry” Is An Anthem About Knowing Your Worth
By El Hunt
Constance Wu On Self-Doubt, Family Drama, & Her Sister's Unwavering Support
By Constance Wu
Get Even More From Bustle — Sign Up For The Newsletter